In this guide, we will take you through the various life cycle phases of cheetahs. 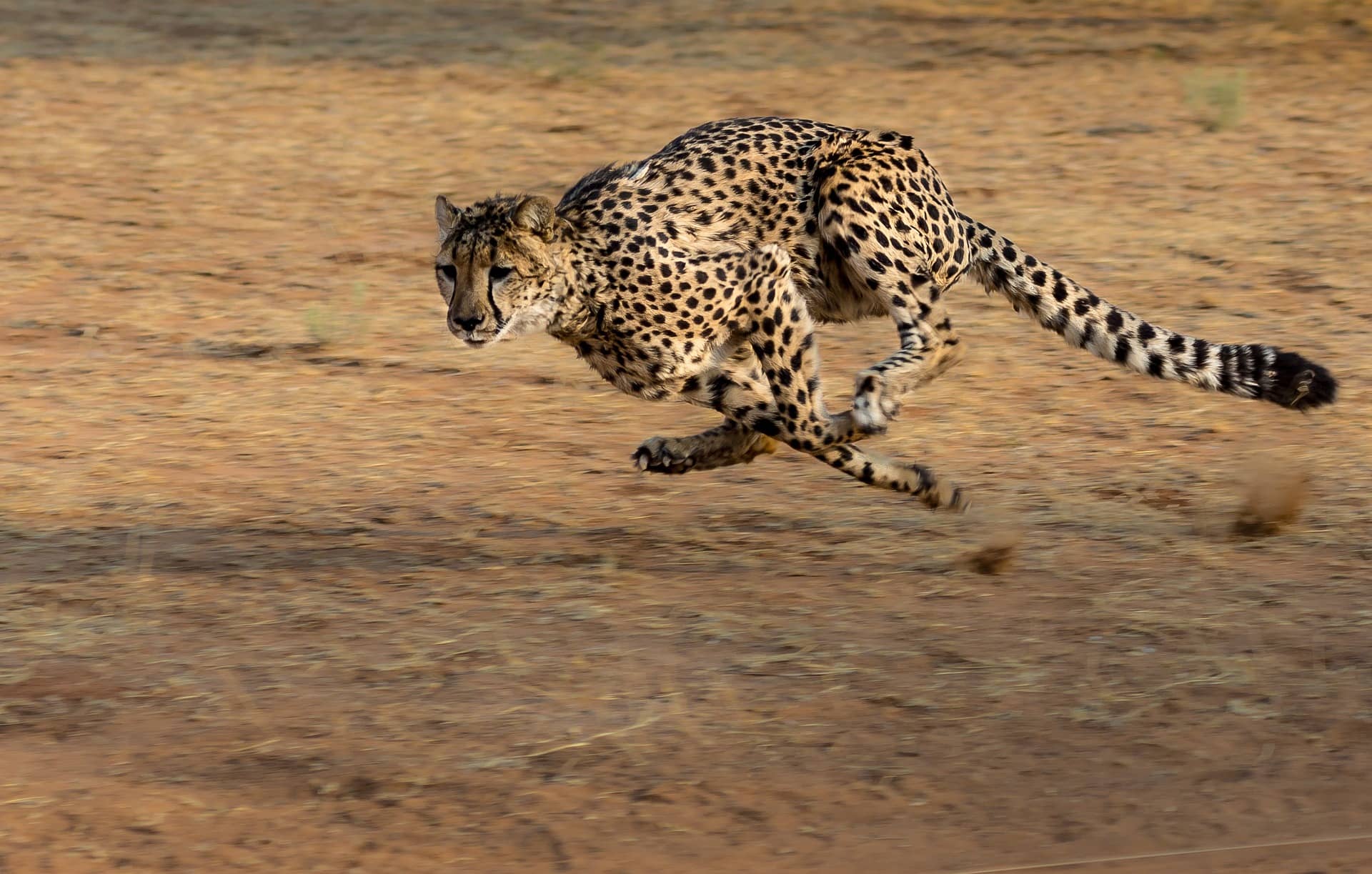 Gestation, birth and, protecting the babies from danger

Cubs leave the den, the importance of starting to play, learning how to hunt

Life as an adult cheetah, finding a mate

There is a lot to cover here so let's dive right in.

Let me guess. You probably already know that the cheetah is the fastest animal on earth.

But there is more to the hunting dynamics of the world's fastest land animal. Speed is only a part of the cheetah’s tactic.

A cheetah can only sprint for about 300 yards before rising temperature and oxygen shortfall will force it to quit.

Just as important is the ability to change direction very quickly to catch prey like small antelopes that are proficient at turning quickly.

Rapid turning during the final stages of the chase may be just as important as accelerating rapidly at the beginning in the carefully planned duel between predator and prey. 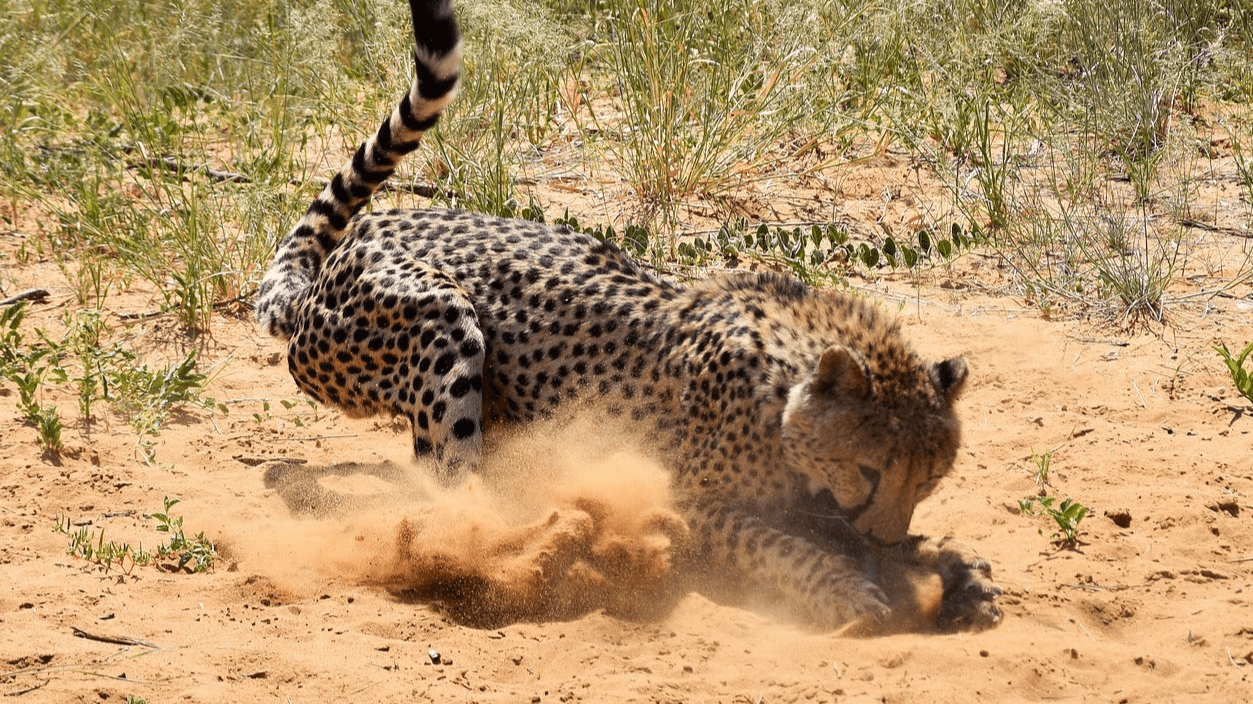 This allows the cheetah to deal with the quick turns motions of the prey as the distance between them closes.

Further on we will also look at which specialized camouflage techniques they use to blend into their environment.

Also, why do Serengeti lions kill about 70% of the cubs and only 5% live to independence and many other interesting facts?

What is a cheetah?

The cheetah is a cat that is famous for its speed.

The cheetah's head, body, legs, and first two-thirds of the tail are covered with black spots. 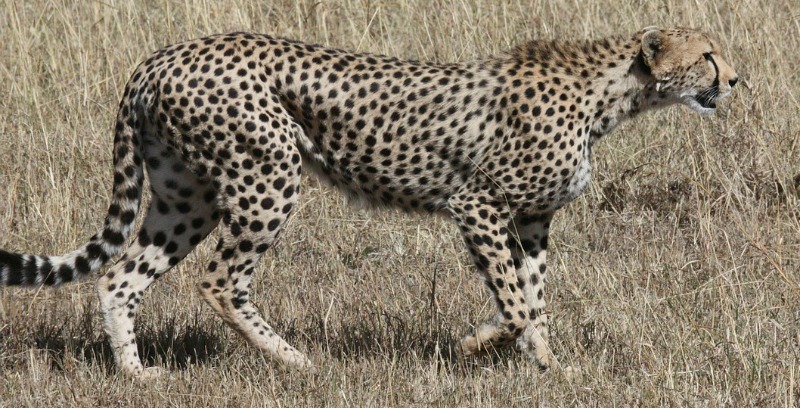 Cheetah legs are long and the claws are permanently exposed

It has a short main from the back of the neck to the shoulders.

The head is small and rounded with large eyes and a distinctive tear stripe from the inner corner of each eye to the corner of the lips. 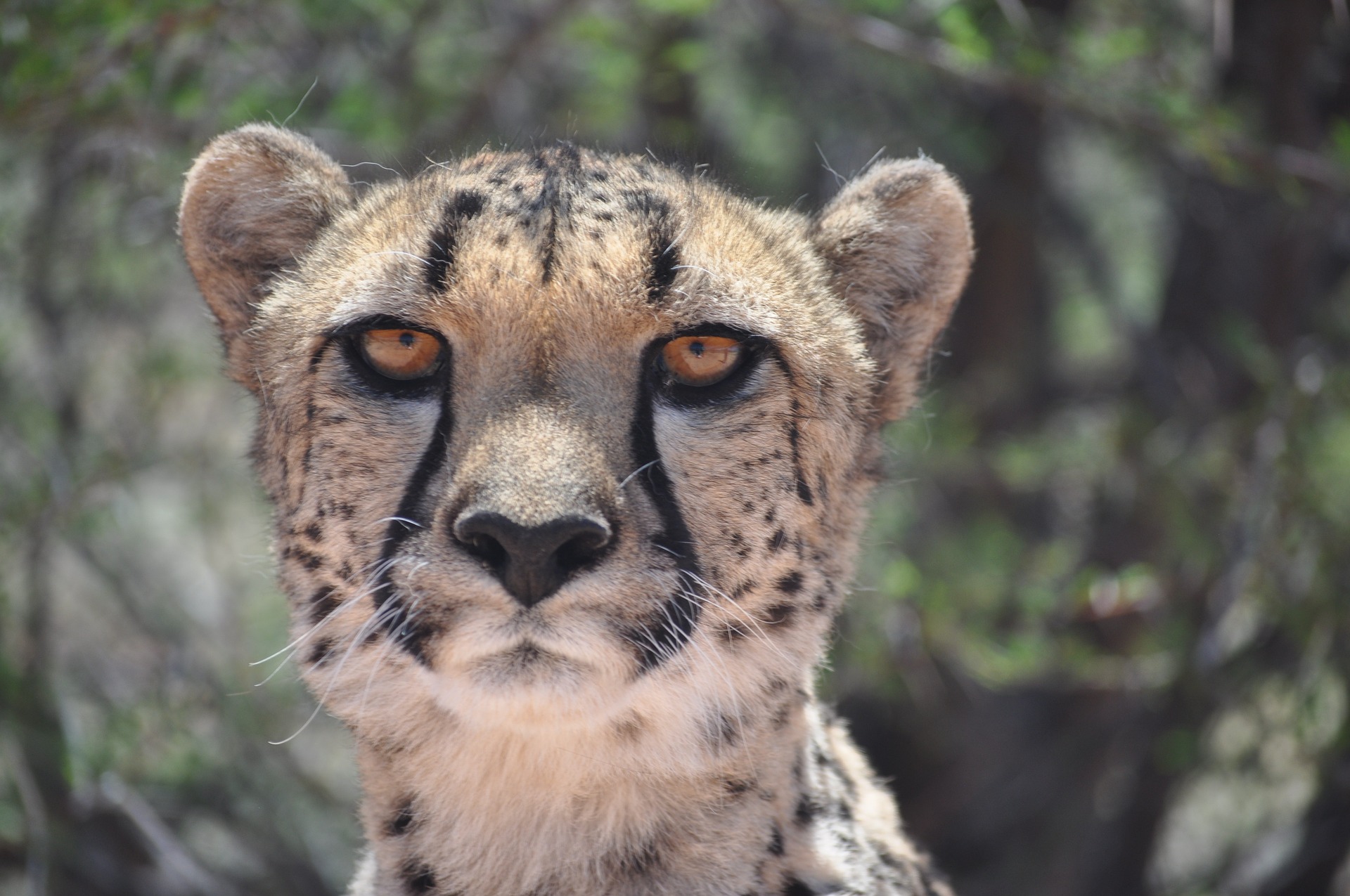 Tear stripe from the inner corner of each eye

The ears are small and round.

The teeth are adapted to eating fast.  They must eat their kill quickly to avoid losing it to larger predators.

How fast is a cheetah?

Cheetahs are equipped for explosive acceleration to a full speed of up to 90 kilometers per hour over a short distance.

Everything from the small head, slender body and, highly developed respiratory system contribute to cheetahs speed. 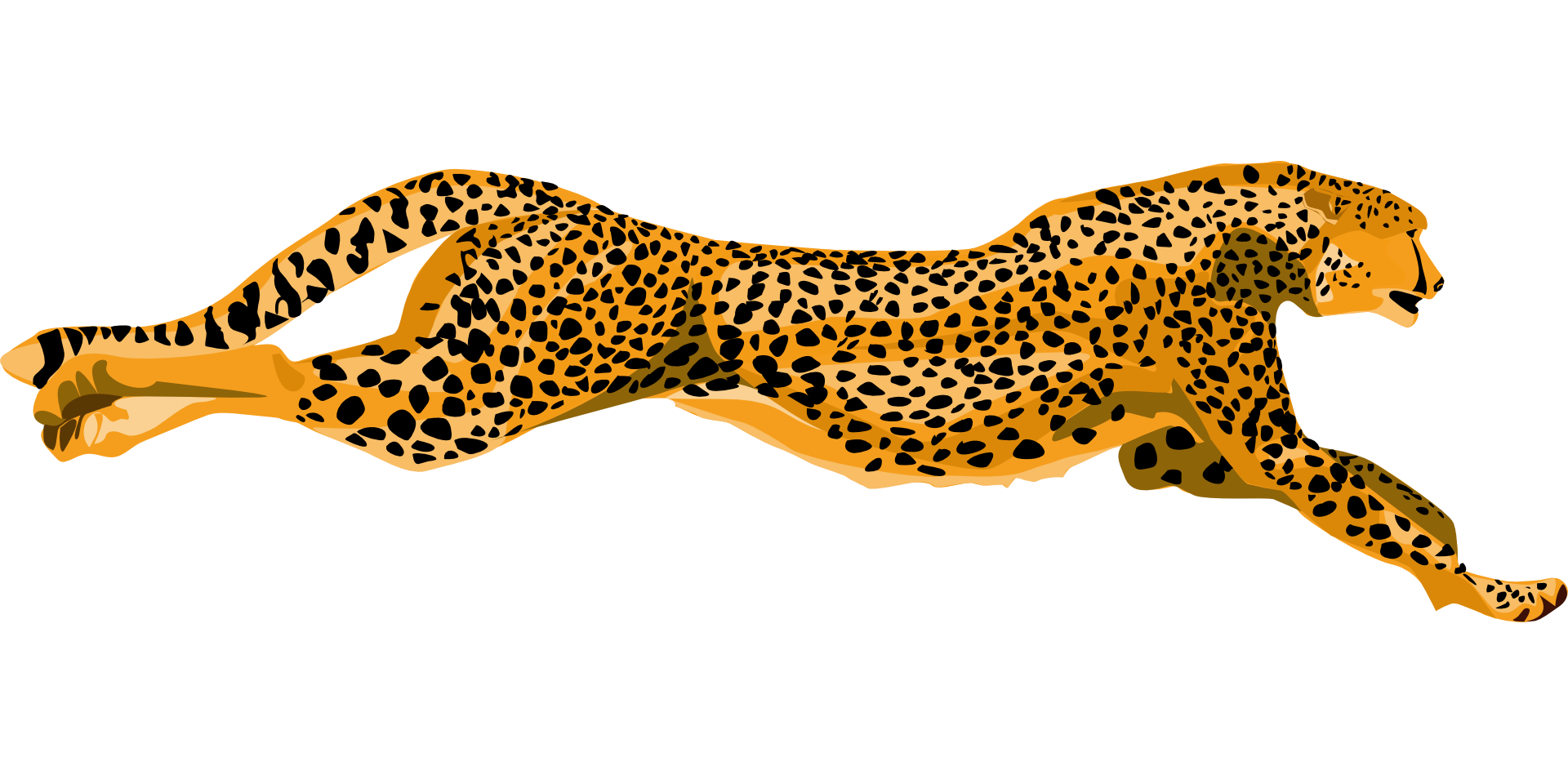 The cheetah is not built for long-distance chases but rather for short bursts of blurring speed.

In February 1999 a South African cheetah called Nyana was officially timed running 100 meters in a record of 6,08 seconds.

It accelerated from 0 to 80 kilometers per hour in 3,6 seconds.

So the next logical question would be ----

How does a cheetah use these features to hunt?

We will have a look at the specific hunting techniques of cheetahs in a moment but first, we have to consider their habitat. 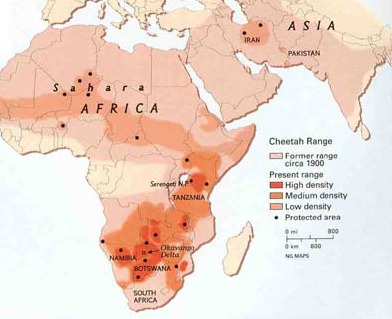 They typically avoid forest and woodland with thick undergrowth as a habitat.

They can operate independently  from water.

How do cheetahs adapt to their environment?

Disruptive patterning is a common adaptation in cheetahs.

The spotted pattern of the cheetah reduces possible detection by breaking up the body outline in tall grass. 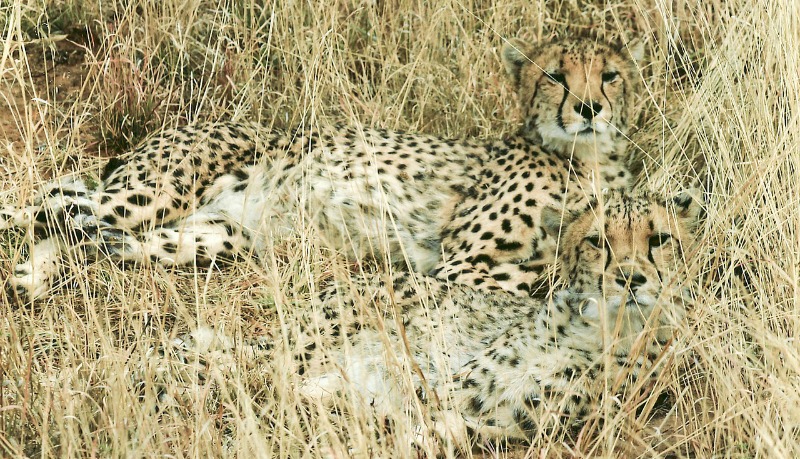 Cheetahs use spots as a disruptive coloration camouflage

Gestation, birth and, protecting the babies from danger

Males track down a female in heat from the smell of her urine. Their first approaches are aggressively rebuffed by the female.

During this period the males spray-mark heavily and fight among themselves for mating rights.

They also scratch up small mounds of loose soil and urinate or defecate on top of them.

Litters from one to six cubs are born at any time of the year.

Shortly before she is ready to give birth the mother makes a den for the cubs. This will be in a quiet hidden spot usually in tall grass.

Cheetah babies start crawling around the den area at four to ten days. This is the time when their eyes begin to open.

At around 3 weeks their first teeth appear.

A mother cheetah will frequently move her litter to protect them from other predators. 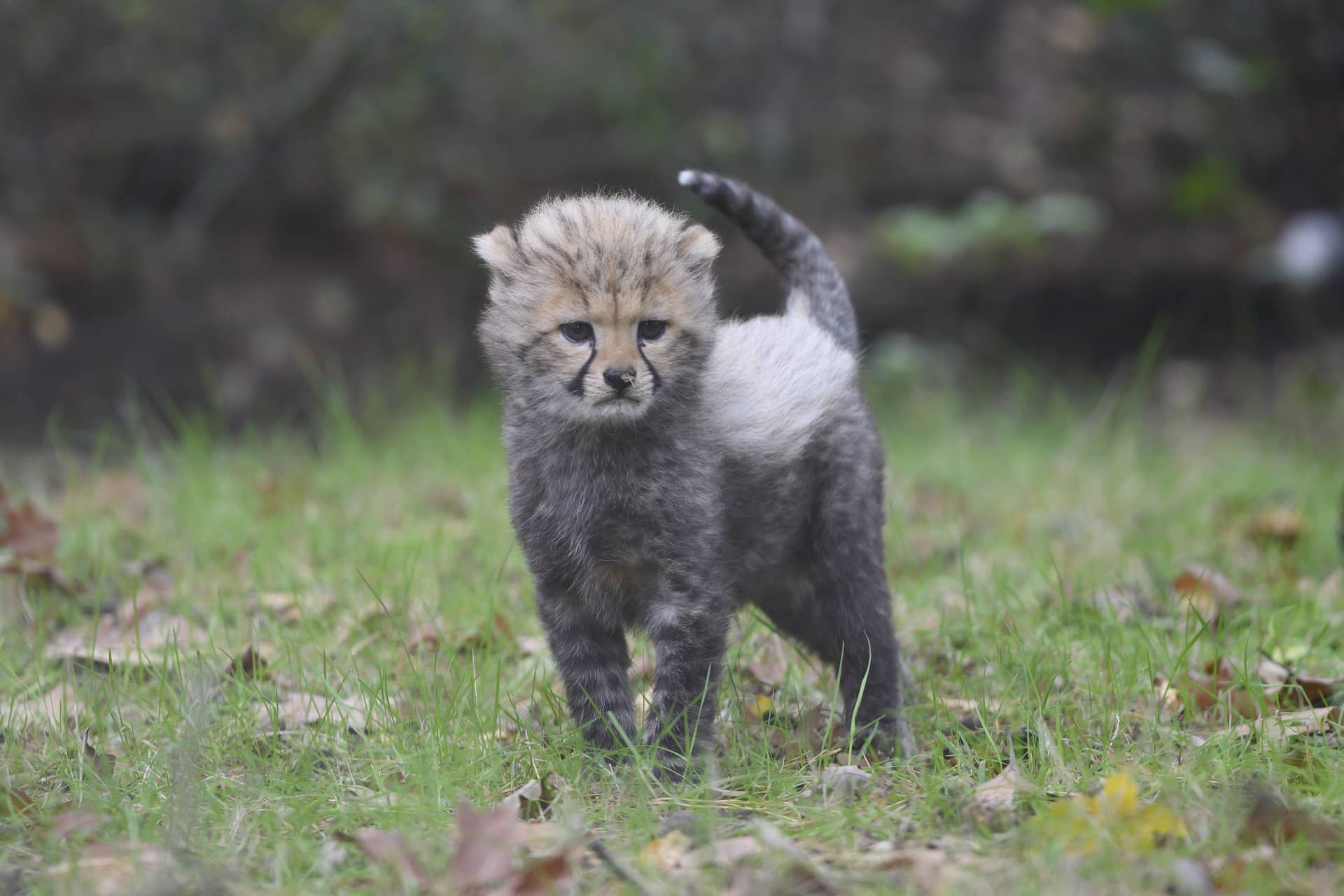 Each baby cheetah weighs from 250 to 425 grams. Cubs are born completely helpless and with their eyes closed.

Scent and touch are used to find their mother's nipples to suckle and are carefully hidden by their mother in dense cover. 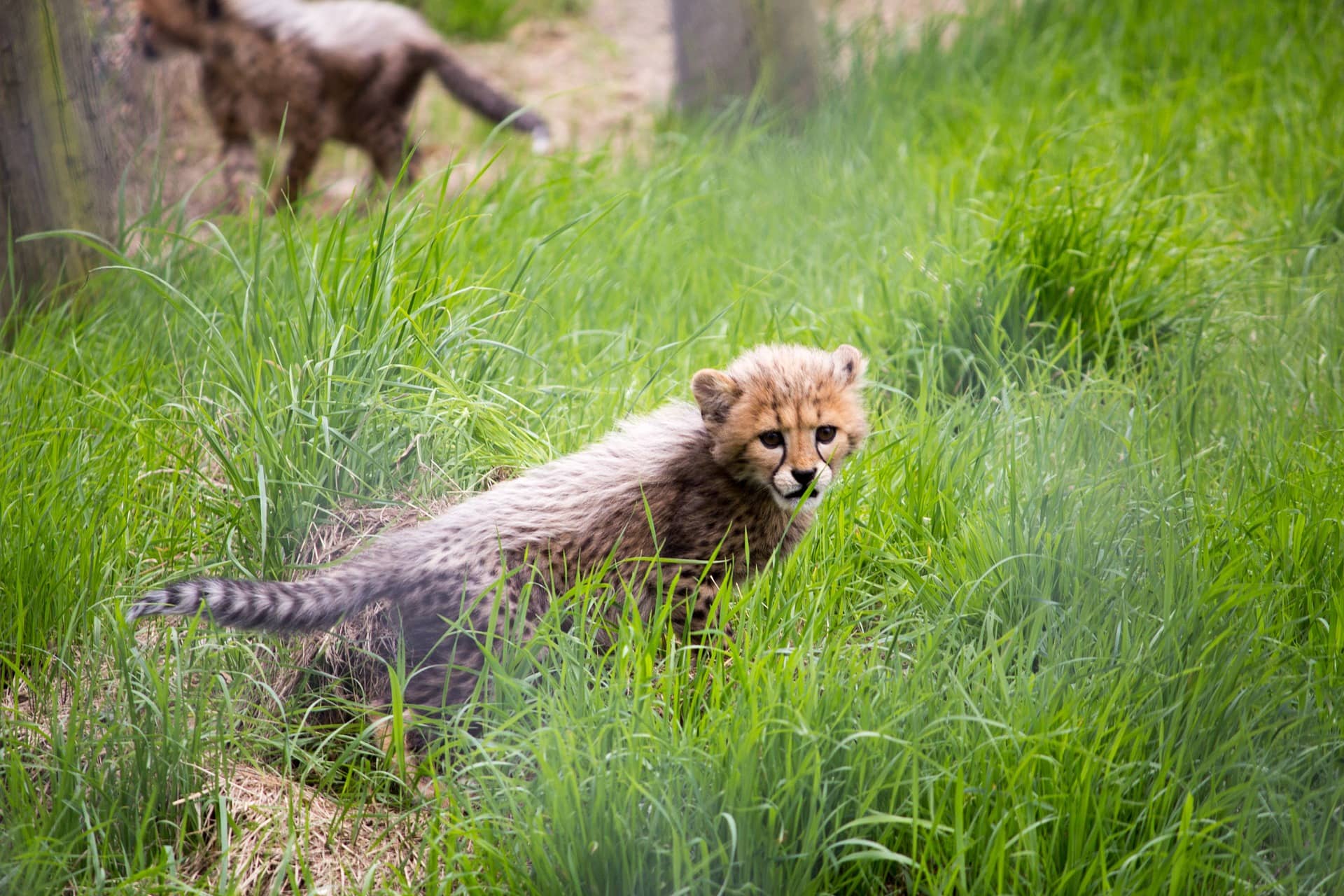 It is thought that this makes them look enough like the ill-tempered honey badger (ratel).  This is to dissuade other predators from risking an attack.

This savagely fierce little carnivore is famous for the fact that it has no problem with running up to a lion or leopard or even a buffalo and driving it away.

Cubs leave the den, the importance of starting to play, learning how to hunt.

The cubs get their first solid food at about six weeks and are weaned at three months. 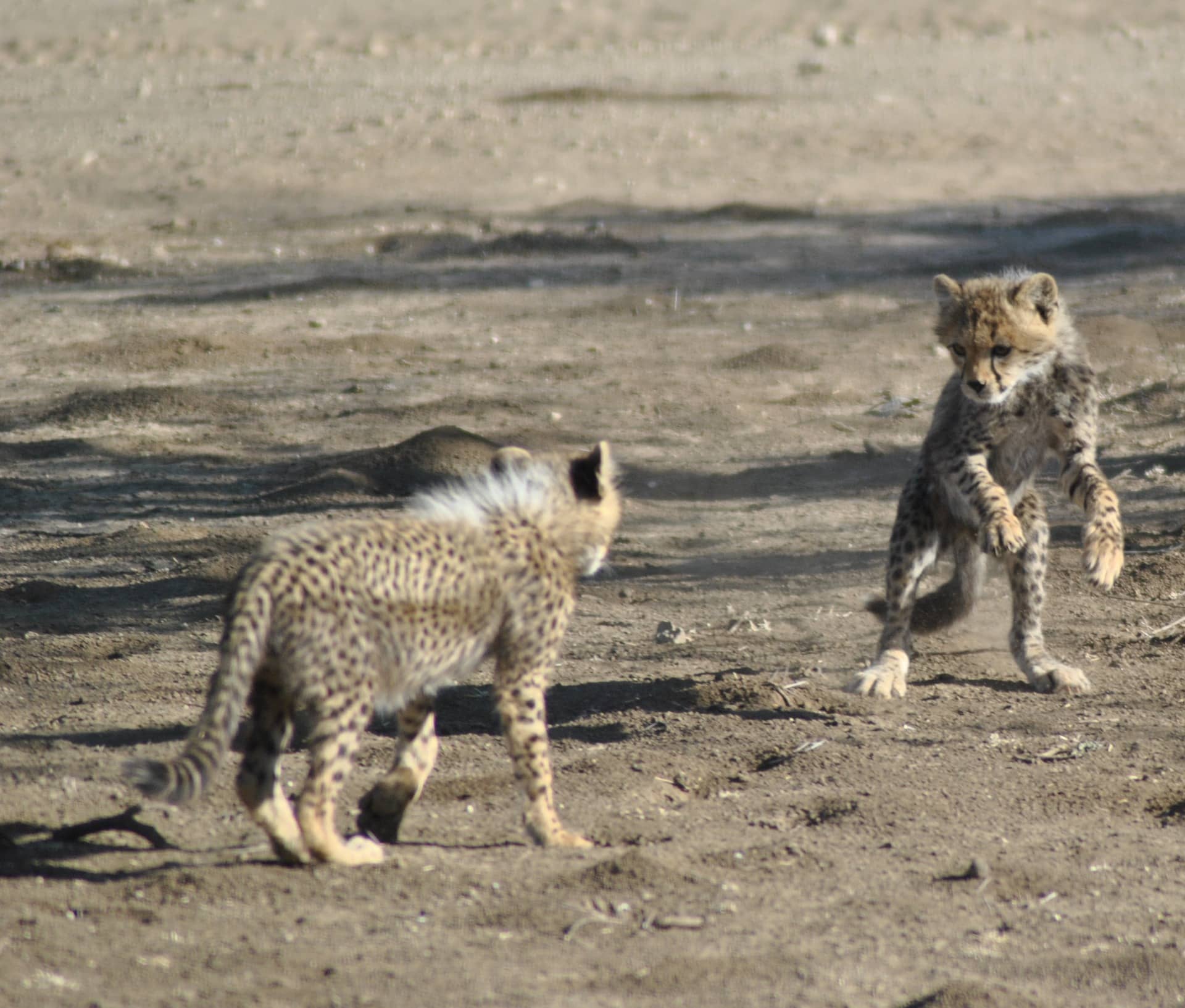 The games cheetah cubs play demonstrate all phases of hunting. They will "play stalk", "play chase" and knock down their siblings as simulated “prey”.

These experiences will teach them skills they will need to survive on their own. 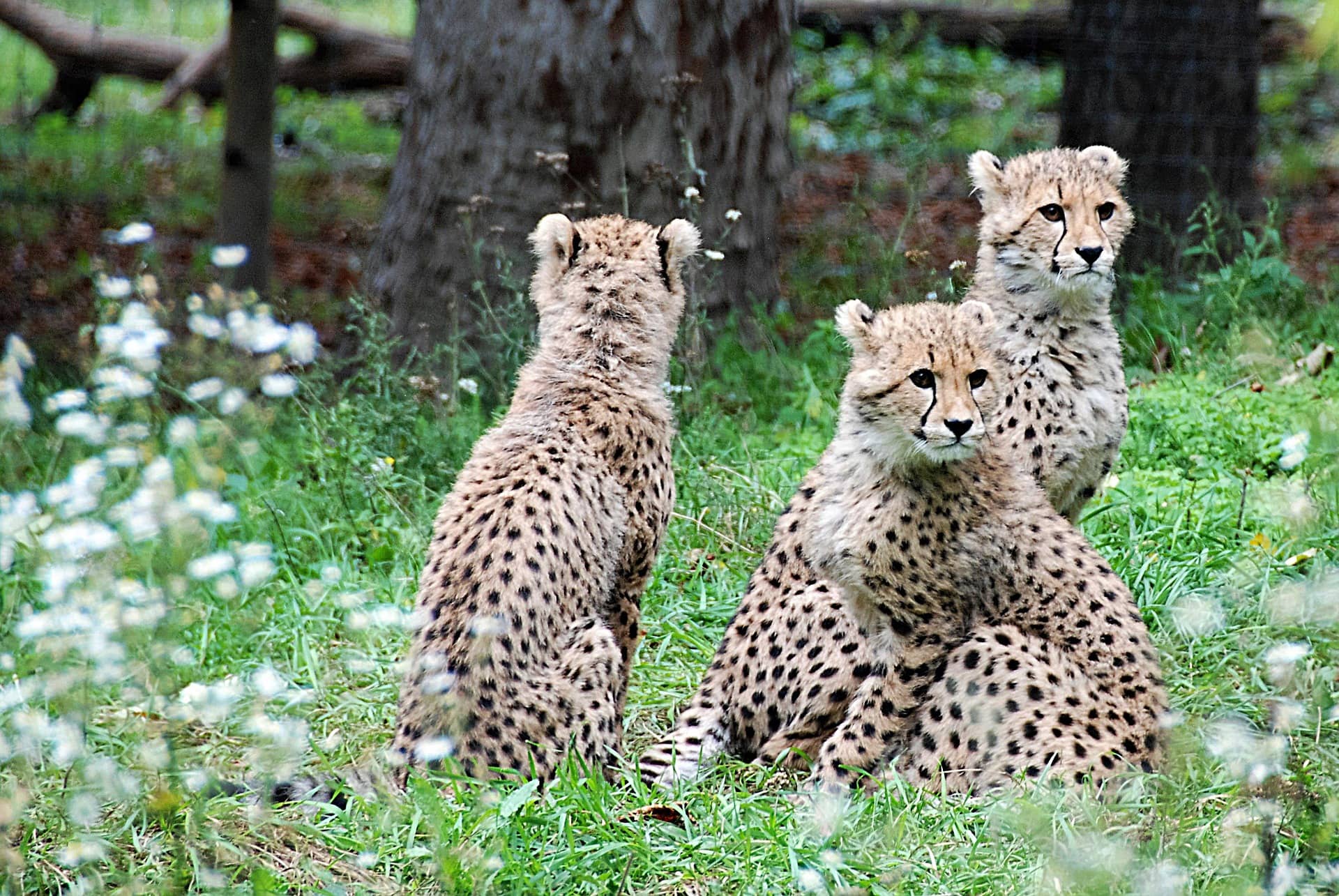 At four to five months their mother brings them live prey to practice their hunting skills on.

The mother begins bringing live gazelle fawns and hares for them to practice catching and killing. They seldom master the art of killing before 15 months.

How vulnerable are cheetah cubs to other predators?

In the Serengeti lions kill about 90% of the cubs and only 5% live to independence.

The cubs are very vulnerable to predation and are frequently moved to avoid predators. 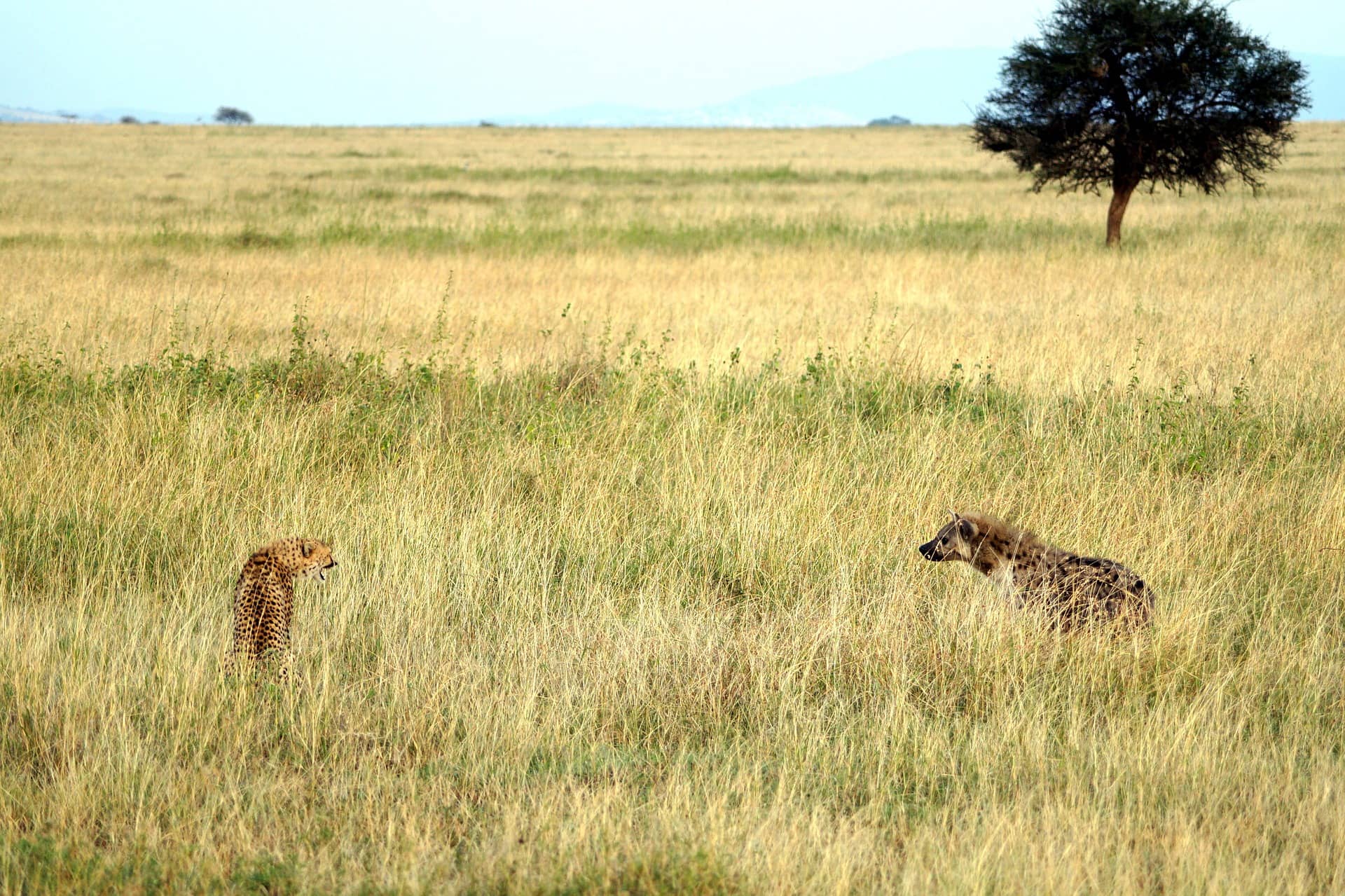 Lions, spotted hyenas and leopards are the most significant predators of cheetah cubs but even smaller predators like ratels and jackals can kill them. 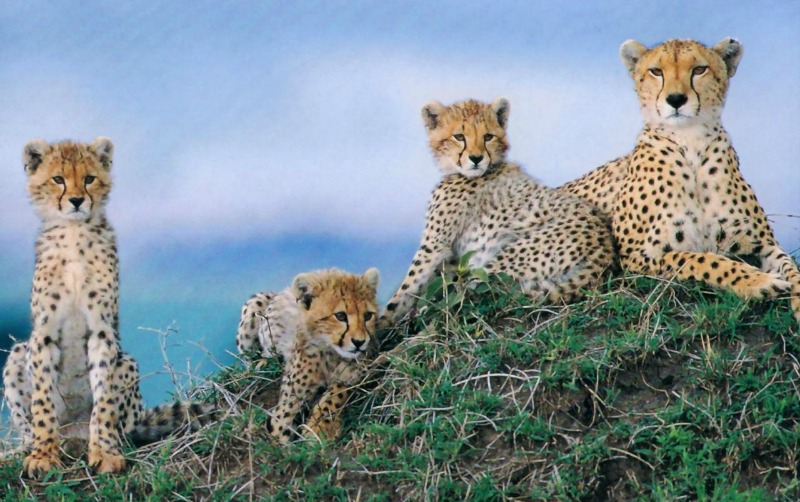 These African animals are highly specialized for a particular style of hunting.

Cheetahs use places of elevation such as a termite mound or trees as vantage points to keep a lookout for prey. 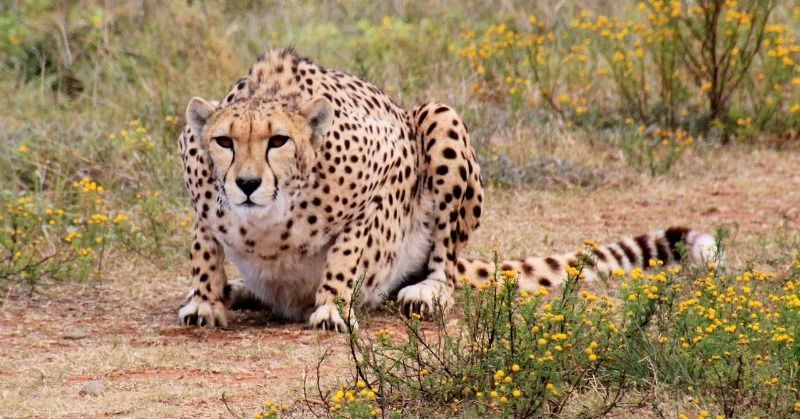 A cheetah hunting its prey will start with a slow stalk

If cover is available they will use it when stalking.

They typically select the least vigilant prey on the fringes of a group of animals. 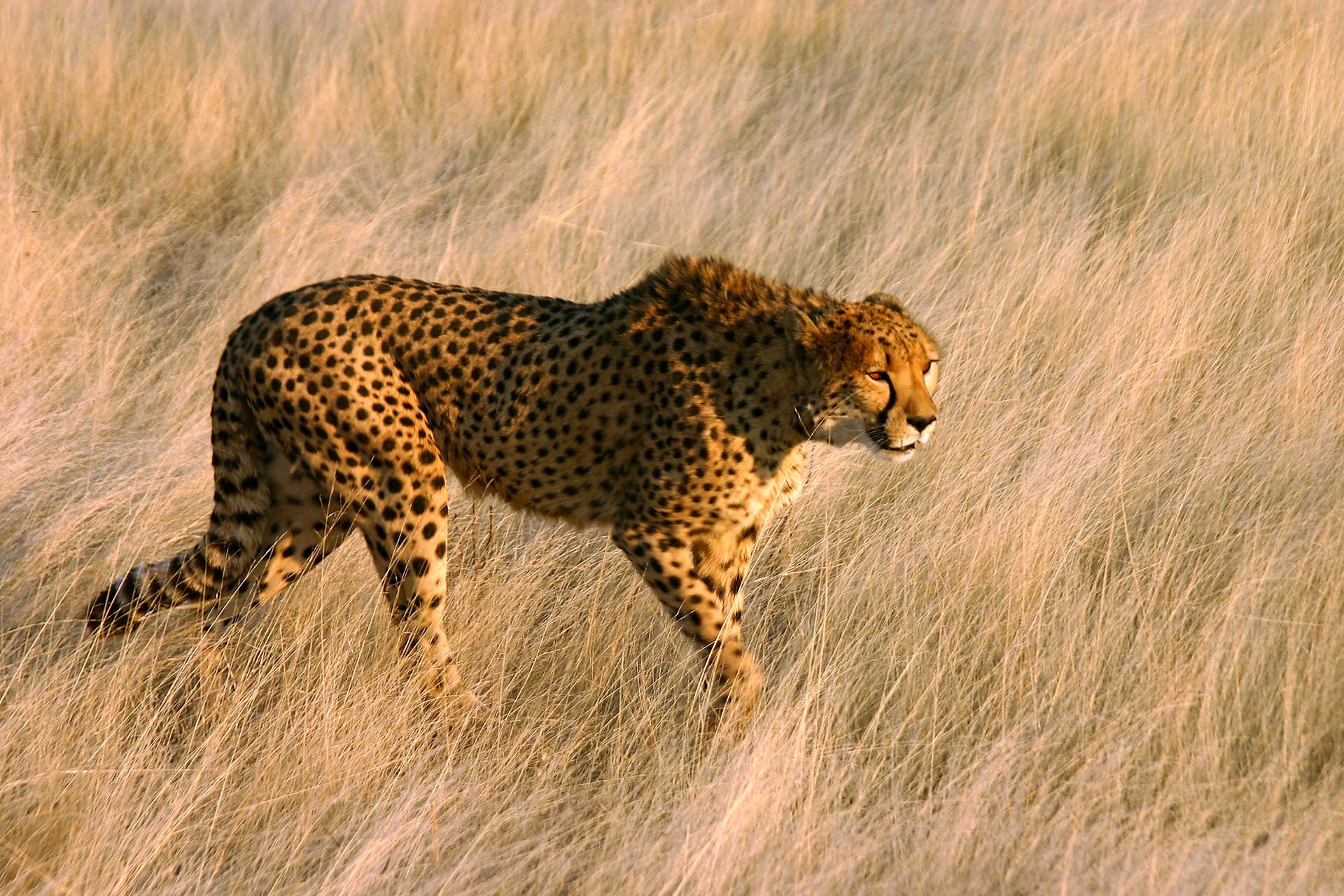 If they work in a team one cheetah will draw the mother's attack the other will chase the infant.

A cheetah hunting its prey will start with a slow stalk.

If its prey sees it before it gets within about 100 meters it will give up the stalk because it depends on the element of surprise for success.

If it can get within 100 meters it will charge.

Their chances of success are better if it can attack from less than 30 meters while its prey is still unaware of its presence.

This will be followed by an explosive acceleration to a full-speed at 100 to 120 km/h chase.

They can then get up to full speed while their prey is still getting into its stride.

To understand how cheetahs catch their prey, firstly notice how the long and slender body of a cheetah consists of a small and light frame. 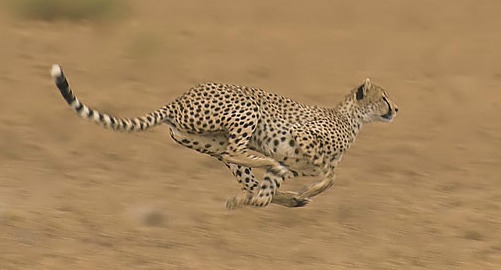 Cheetah chases will last for up to 600 meters after which they have to give up the chase. They simply lack the stamina for longer chases. 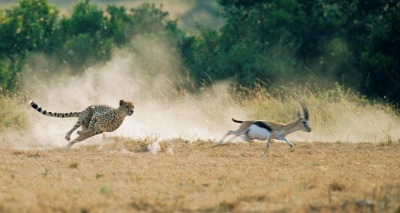 Cheetahs are successful in about two out of seven hunting attempts

What can a gazelle do to not becoming dinner?

A gazelle can turn sharply and because of the cheetah's greater speed dodge it a few times.  If it manages to do this 3 or 4 times, the cat runs out of steam and it can escape to fight another day.

Antelopes can easily outperform cheetahs when it comes to endurance.

The most common cause of failure in cheetah hunts is that the prey sees them before they charge.

A cheetah hunting its prey trips it with one or both forepaws.

When the prey is knocked off balance it gives them a chance to grab it by the throat.

It will then suffocate it with a clamping bite to the underside of the neck.

The favorite prey of a cheetah hunting for its food is smallish antelope.

This includes springbok, steenbok, impala, or the young of larger species.

They also eat smaller mammals such as hares, springhares, porcupines, and ground birds.

They do not usually scavenge.

Hunts for large antelope like yearling wildebeest, kudu, waterbuck, and gemsbok are successful only when a group of cheetahs operates together in a coalition.

Their teeth are too short for the killing bite used by other cats.

If there is cover nearby it will drag its kill there to escape the notice of other carnivores and vultures. 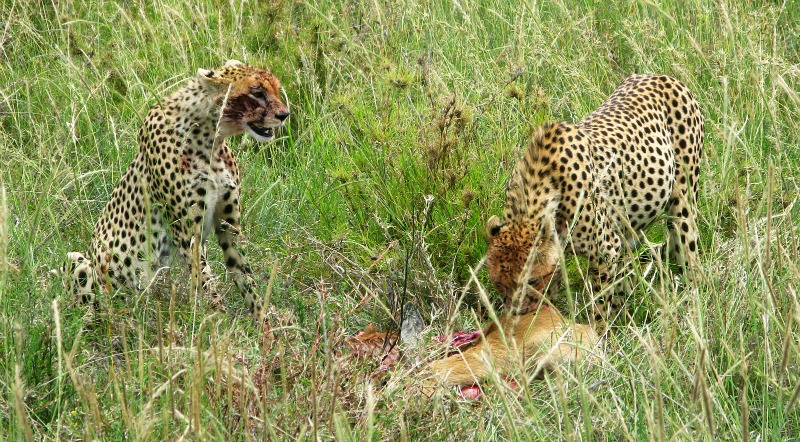 Cats like cheetahs are specialized carnivores that capture live prey

With its lightweight teeth and skull, this African animal has difficulty biting through the skin of even small antelope.

It usually starts feeding at the groin where the skin is thin.

It eats the meat off one thigh, then the belly, the other thigh, and finally the forelegs.

They do not eat the skin and intestines of their prey, and can chew up only small bones. 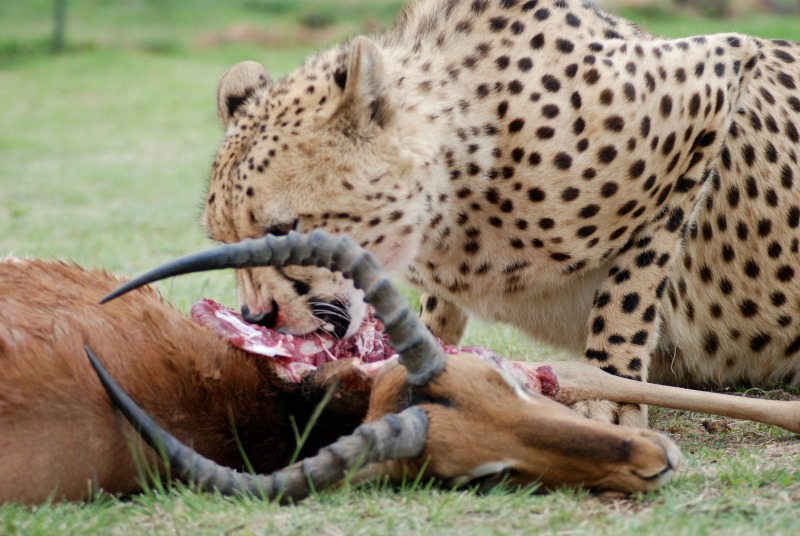 They are very dependent on a diet of meat

In the Kruger National Park, cheetahs lose 14% of their kills to spotted hyenas. Spotted hyenas, leopards, and even warthogs, also steal their kills.

Vultures are not only competitors in their own right but also attract the attention of lions and spotted hyenas.

They feed quickly before their kills can be stolen.

Their light builds and small teeth make them very vulnerable to attacks by other predators.

What sounds do cheetahs make?

They use high-pitched, bird-like chirrups as short-range greetings and contact calls.

When threatened they give a loud, barking growl and snarl, often slapping the ground with their forepaws at the same time.

Life as an adult cheetah, finding a mate

Adult females are usually solitary, but their cubs stay with them for up to 18 months.

Cheetah coalitions consist of brothers born in the same litter. 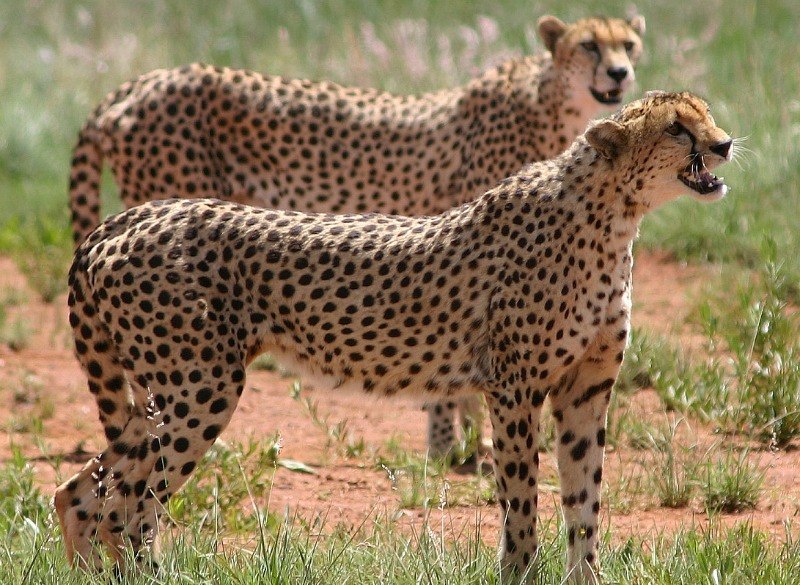 Most Serengeti adult males partner in coalitions. The statistics available show that 40% of coalitions are pairs and 19% in teams of three.

Most of these coalitions are brothers that have cooperated as a team after splitting up from their mother at the age of  17 to 23 months.

In such a coalition one cheetah will usually be dominant and control most of the mating opportunities.

But not being the dominant male is at least better than being a single cheetah.

In the Serengeti only 4% of the single males ever win territories.

Another advantage of coalitions is their tendency to kill bigger animals than single hunters. 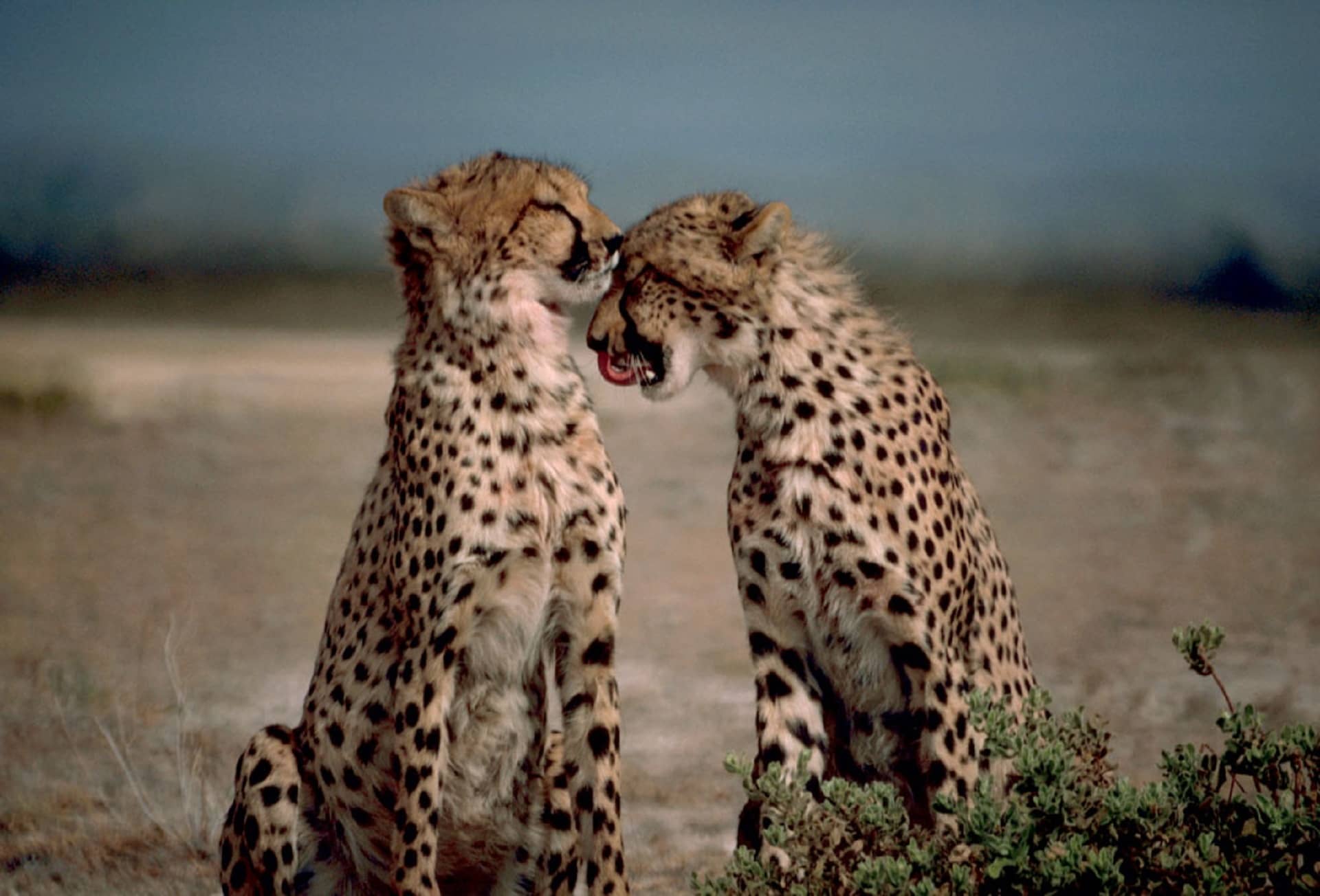 Cheetah on their own, have little hope of establishing a territory but in coalitions, they have a good chance of securing turf.

This small group will live and hunt together for life.

They will claim a large area, which may overlap several female territories.

Some males hold territories for up to four to six years.

If the marks are more than a day or two old intruders ignore them and so some areas are used on a 'time-share' basis. 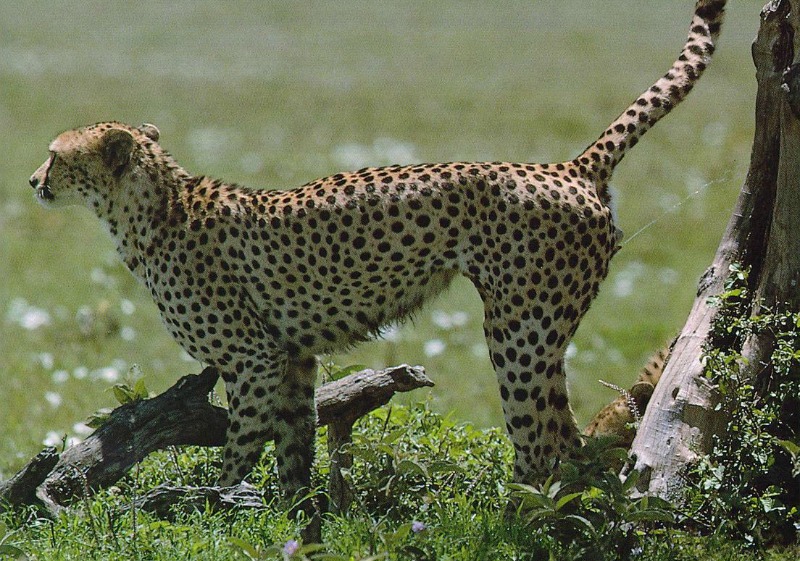 Cheetah scent-mark their territories with urine

Trespassers who get caught are savagely attacked and sometimes killed.

Please share your feedback, favorite cheetah facts and observations via the comments below.