The honey badger  - Is this the world's most fearless creature?

The honey badger comes with a well-deserved reputation. This animal is known as "the world's most fearless creature".

This prestigious title has been earned because this animal's tenacity.

This little creature will munch honey from the African ‘killer bee’ hives and not think twice about eating venomous snakes. They have also been seen taking on a pride of lions. 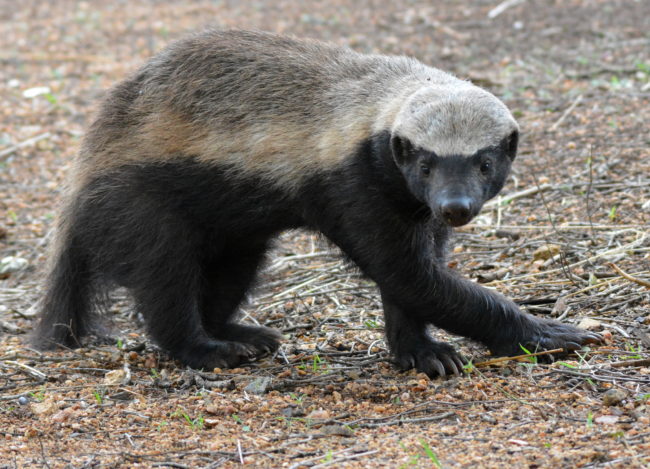 So have you ever wondered?

How are honey badgers so tough?

These wildlife animals are well equipped to live up to their fearsome reputation. 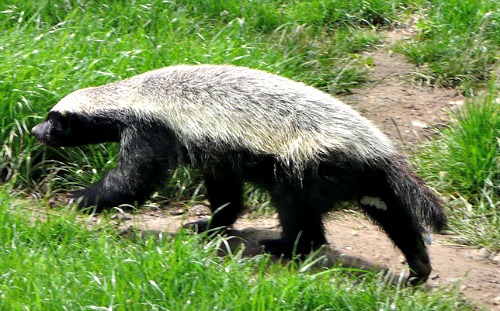 There are accounts that they have killed a blue wildebeest, a waterbuck, and a 3-meter python.

It attacks fearlessly when threatened and reputedly has also put up savage resistance against a lion.

The antelope victims bled to death after having the scrotum torn off.

It is thus no wonder that much larger predators usually give them a wide berth.

Many people get reminded about the fierce and fearless honey badger, via a comical YouTube video that has become famous.

This tells the story of how honey badgers “don't care” about standing up to vicious predators when getting their food. The video contains footage of a National Geographic documentary of a badger winning a fight with a king cobra.

It is stocky and compact in build and in addition to this it has a thick skull, a strong neck, and shoulders.

Their coat is also very loose resulting in their ability to turn around and bite back with powerful jaws and fight back with their claws.

Their distinctive black and white pattern is undoubtedly a warning to other animals to stay clear.

Under threat, a ratel gives a high-pitched growl.

The bite of a king cobra can cause the death of a healthy human adult within fifteen minutes. Honey badgers have been noticed to survive bites from various venomous snakes. A quarter of their diet consists of these animals.

Do they eat honey?

Yes, it is well known that they have a fondness for honey and are notorious for raiding beehives.

This causes most of the bees to flee while it scoops out the honeycomb.

When the badger then leaves, the bird eats the remaining dead bees and pieces of honeycomb.

The thick skin of this animal may offer protection from bee stings.

They are however not impervious to them and bee stings may in fact account for some of their deaths.

Is it true that they cooperate with Hone guide birds to find honey?

The stories are that the Greater honey guide bird supposedly guides them to the beehives by calling them and repeatedly fanning its tail, displaying the white outer feathers.

The bird then swoops from tree to tree and waits for the animal to follow it to the bee's nest.

The honey badger will answer the bird with a grunting and growling sound. 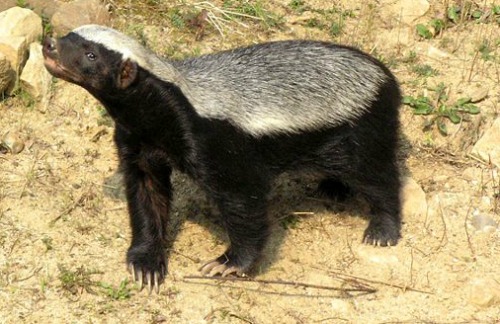 This African animal is however a very nocturnal animal and doubt exists about how reliable a partner the Greater honeyguide bird would make as a mainly diurnal animal.

This issue is still contentious and despite the many cited stories remains to be undocumented.

They are active at any time of the day and night but they become nocturnal where there is human disturbance.

They can tolerate both very wet and very dry habitats. 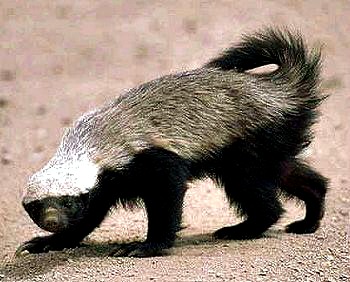 You can expect to see them in moist savanna, semi-desert, and forest areas.

They are nearly always solitary although sometimes pairs can be seen together.

When they move slowly, sniffing for prey with its nose close to the ground.

They liberally apply scent markings to crevices, holes and the base of trees while they move.

They sleep in rock crevices or in holes in the ground that they dig themselves or take over from other animals.

What do honey badgers eat?

A ratel will eat a variety of foods  including:

The honey badger is a master the art of digging, and climbing trees. Ratels are also good swimmers.

They  will also climb into trees to get at birds' nests and bees' honey.


This little African animal is extremely strong and it uses the long, sharp claws of their front feet to dig rodents, scorpions and baboon spiders out of the ground.

They often tear apart tree logs to get at the insect larvae and beetles inside.

Other small predators like black-backed jackal may shadow a honey badger hoping to grab prey that may escape the badger.

What other mammals will they eat?

In terms of small mammals their intake consists of 30% mice.

Scorpions and spiders make up 14%, lizards 18% and snakes 18% of their mammal intake.

Most of its prey is dug out of burrows.

Because of raiding honey, they do face an increasingly hostile challenges  from beekeepers.

Beekeepers are not prepared to lose large amounts of their honey to the badgers.

The result is that they are increasingly poisoned, trapped, and shot.

They also suffer indirect persecution through indiscriminate poisoning and trapping for jackal and caracal.