The Meerkat
Want to know some cool facts and see the pictures?

This is a complete guide to the fascinating lives of meerkats.

So if you want to learn more about: 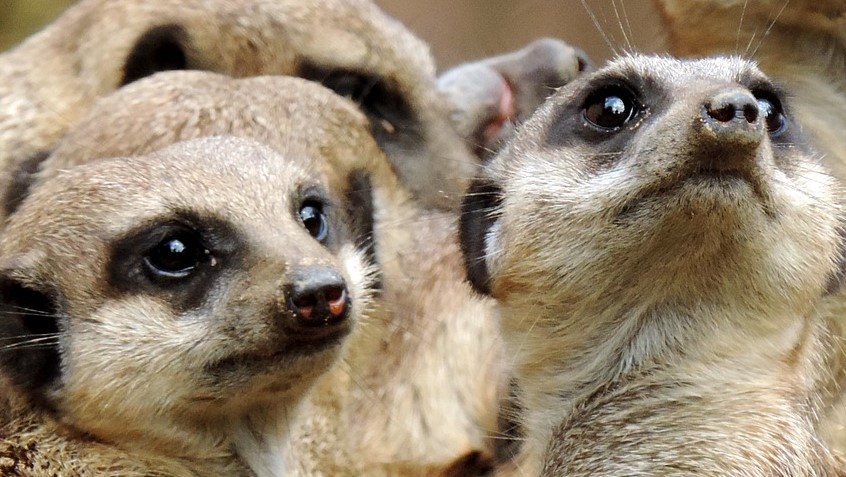 What is a meerkat?

They are small burrowing mammals, a type of mongoose which is found in the South West arid zones of Africa.

Their color is a silvery brown with broad, uneven dark bands across the back.

The underparts of a meerkat have thin, short hair, and dark skin shows through the hair.

You are usually able to notice the black roots of the hair when the meerkat is fluffed up during sunbathing. 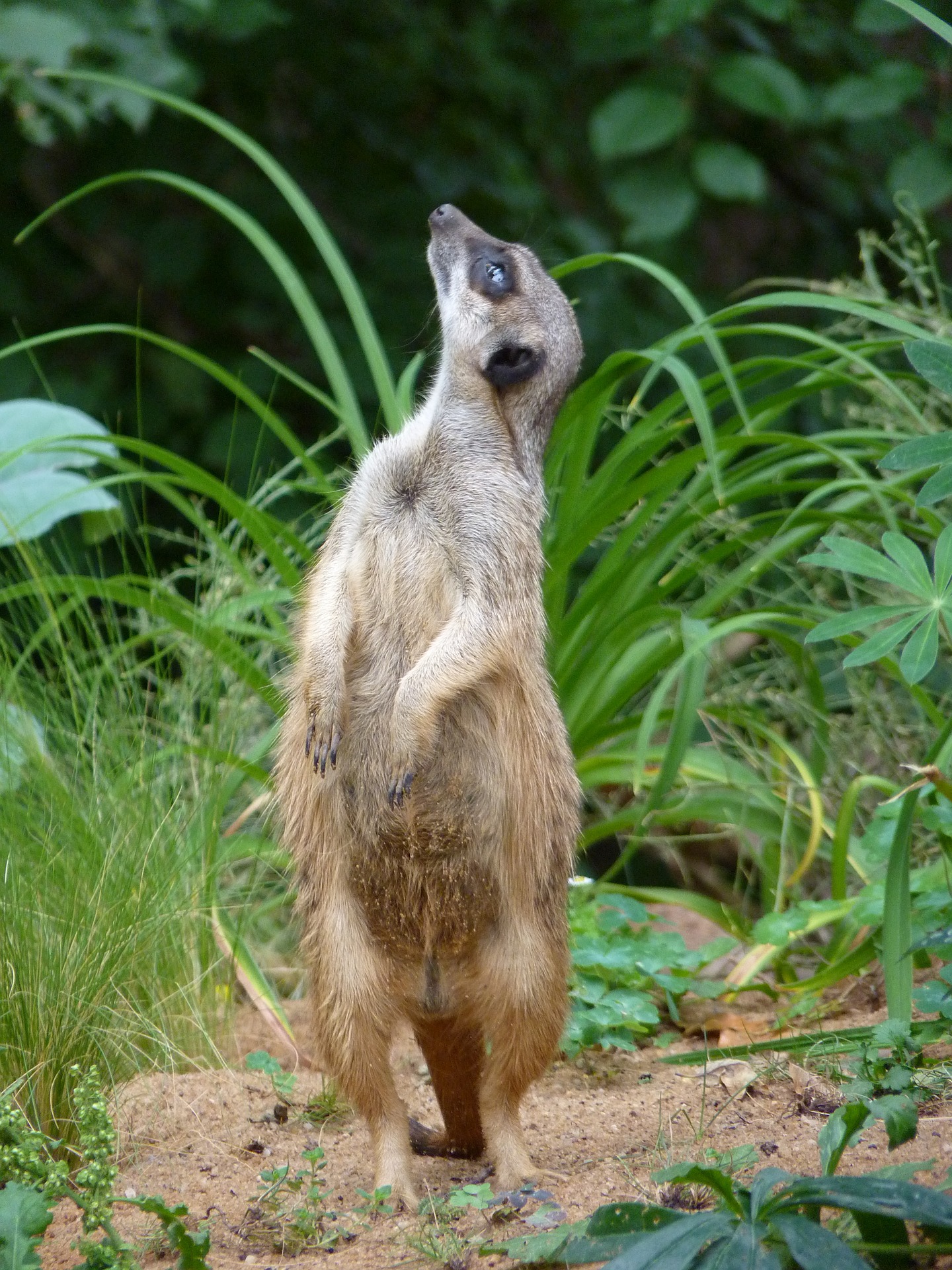 The snout of a meerkat is long and pointed.

Meerkats have noticeable black stripes around the eyes.

Their ears are small and set low on the head.

Their legs are long and there are four toes on each foot.

Each foot has curled claws.

The tail is long, thin, and has a noticeable black tip.

Where do meerkats live?

These African animals are found in the deserts and grasslands of Southwestern Africa.

Meerkats can therefore be found in Angola, Namibia, Botswana and, South Africa.

In South Africa, they, live in the Kalahari, highveld areas, and the Karroo or any adjacent dry savanna.

What is a meerkats habitat?

Scrub, open woodland, and grassland. Extending into fynbos in the Western Cape Province and savanna towards the east.

These animals do not occur in true deserts, in forests, or in mountains. 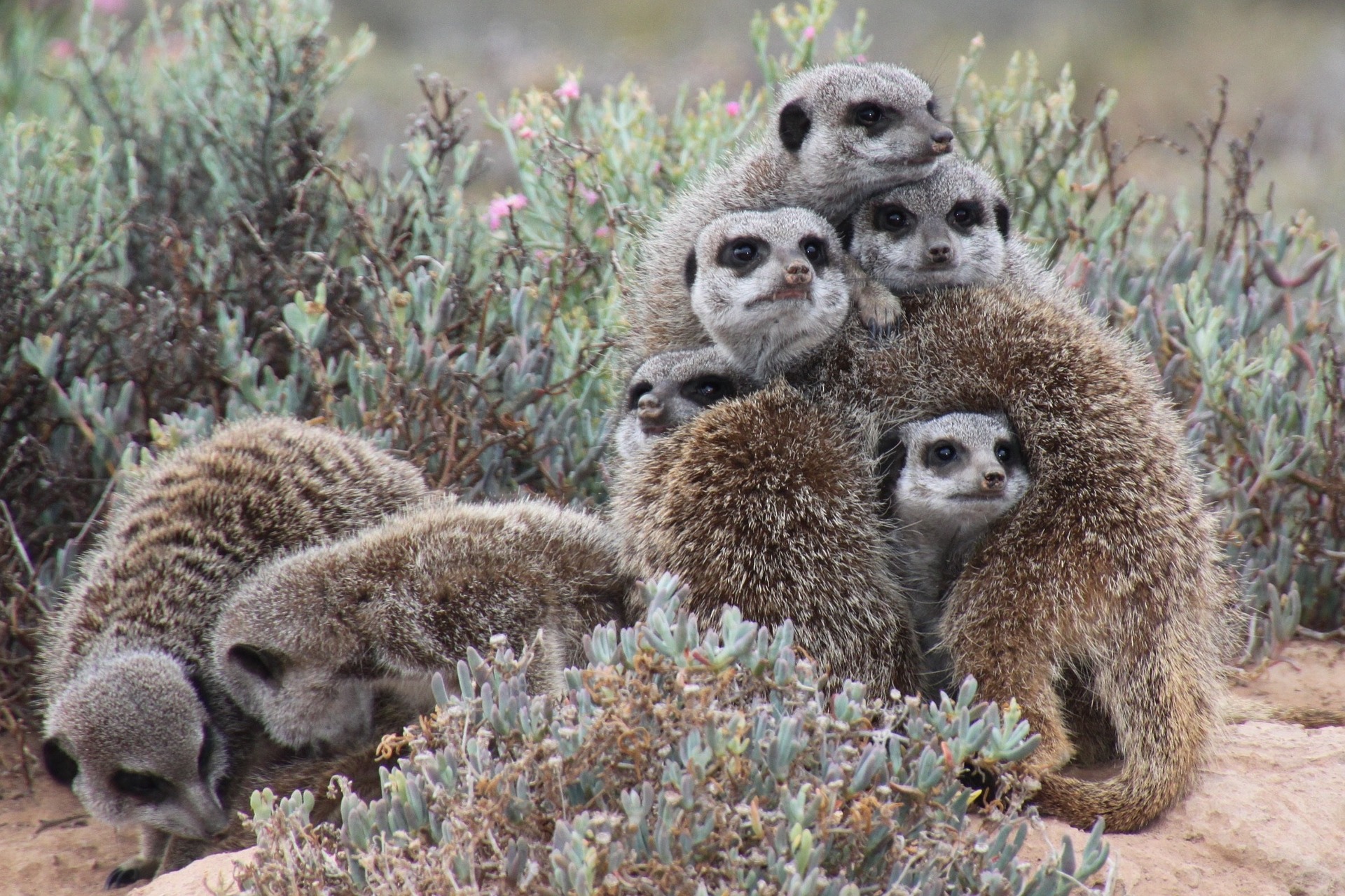 They like habitats with hard ground, such as alkaline pans and stony riverbanks.

To a smaller extent found in sandy soils.

Where do meerkats sleep?

How long do meerkats sleep for?

Meerkats sleep between 10 and 12 hours every day, and normally go to bed in the early evening.

Meerkat groups may also dig their own dens.

They sleep at night in seated groups, folded front to back. In this way, they can share body heat. 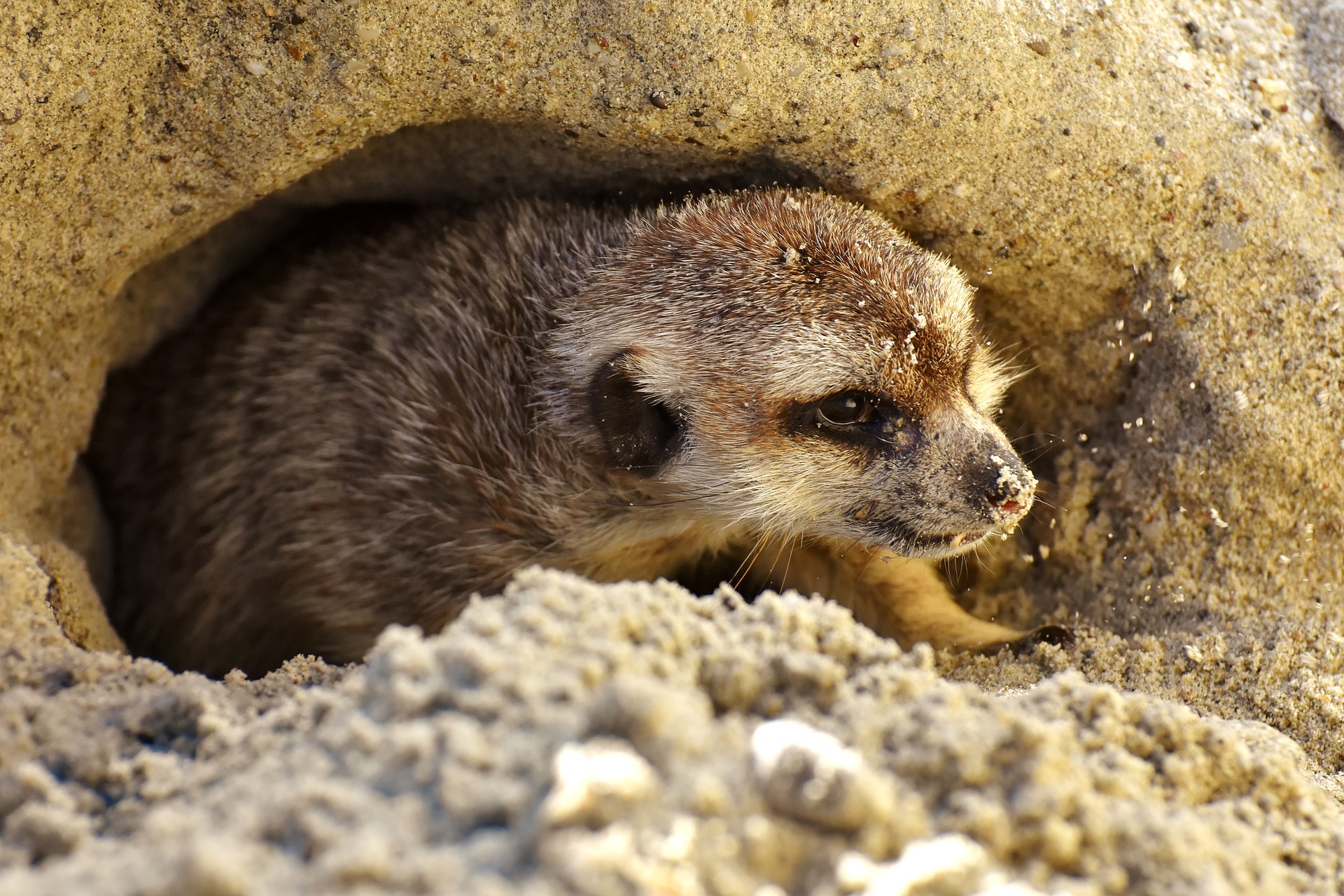 Their burrows can be about 6 to 8 feet deep and have several sleeping rooms.

They enjoy cuddling up to each other.

How big are meerkats?

A meerkat has a total length of about 50 cm. The tail is about 22 cm

How does a meerkat move?

Meerkats usually walking on their toes and jump and runs.

These animals are not very good at climbing, but they are outstanding when it comes to digging.

Meerkats are only active during the day. They emerge from their dens around sunrise and retire just before sunset.

They will usually first visit the common latrine.

They will then spend 20—30 minutes sunbathing first thing in the morning.

They get up later in the day on cold or rainy days. 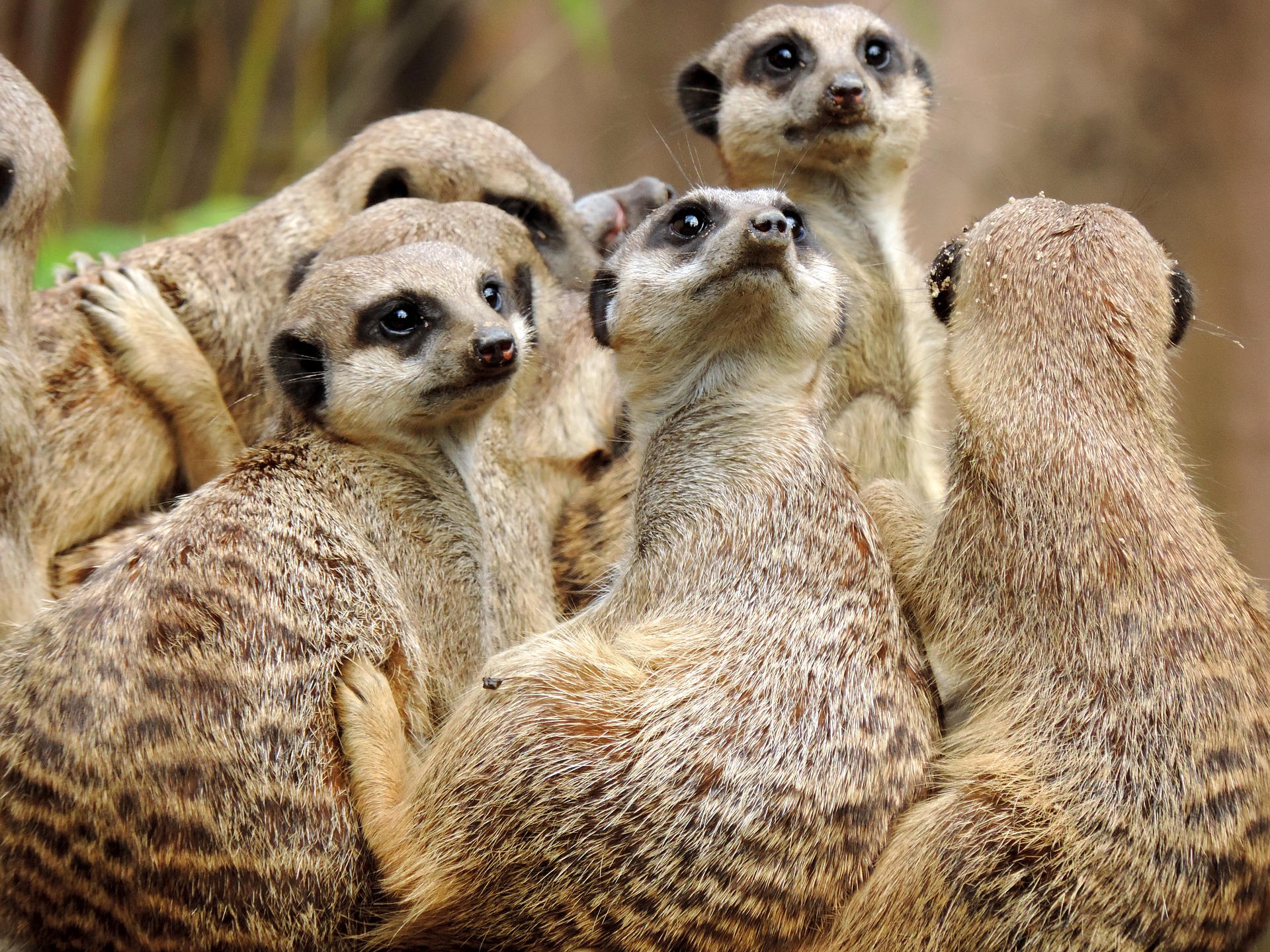 During summer they will take a nap in the shade or in their den.

After they have taken a midday rest, the pack forages again until late afternoon.

By the end of the day, they will relax and interact with each other outside their burrow until the sunsets.

Groups are territorial. Meetings between neighbors often call for chasing and fighting.

Males usually play the watchdog role and are most aggressive when two packs meet. 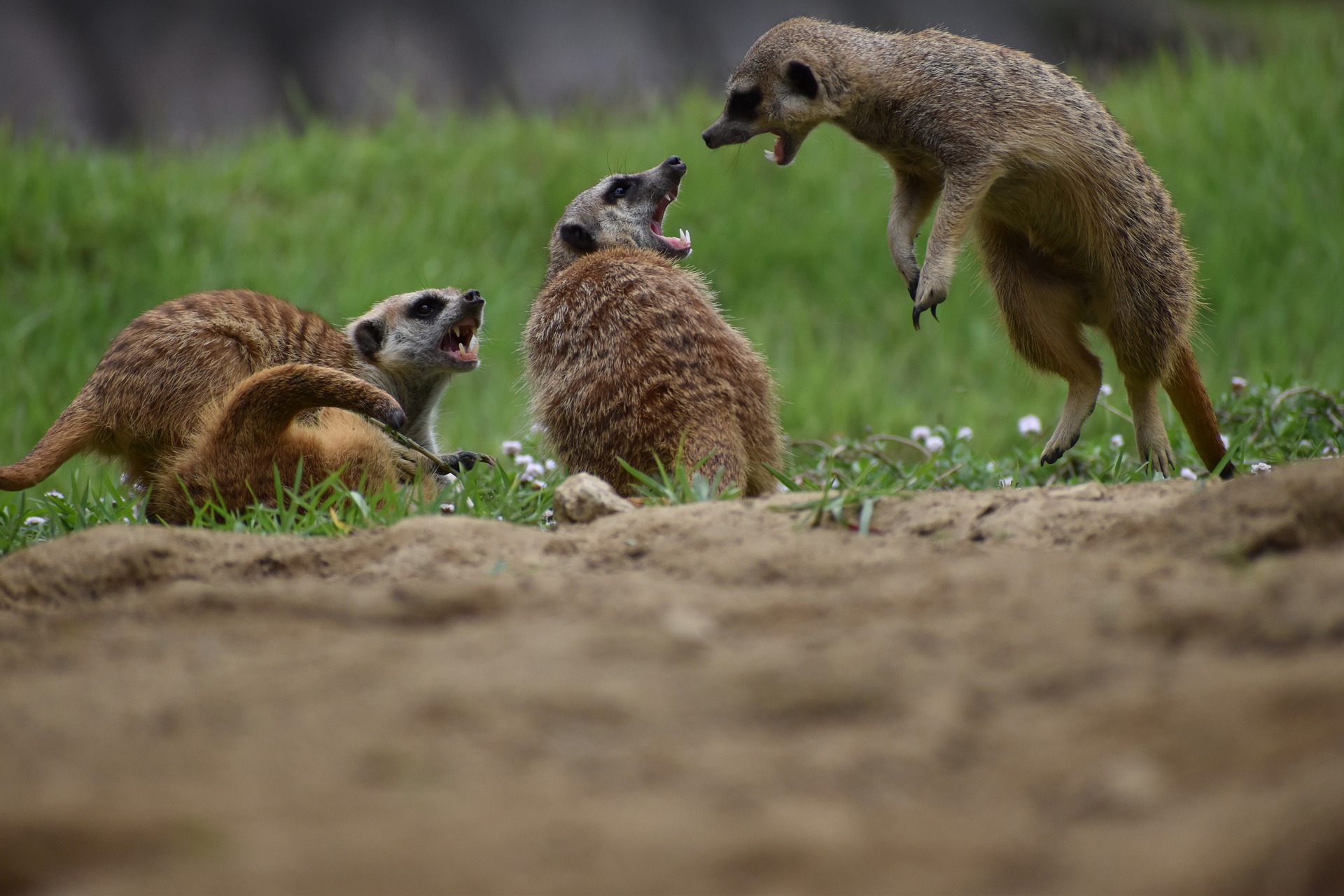 In spite of intergroup fighting, males regularly relocate and try to join another group.

Occasionally females also relocate and participate in caring for the foster pack's offspring.

In small groups only one female breeds. In larger groups, two or three females will breed.

How long are meerkats pregnant? 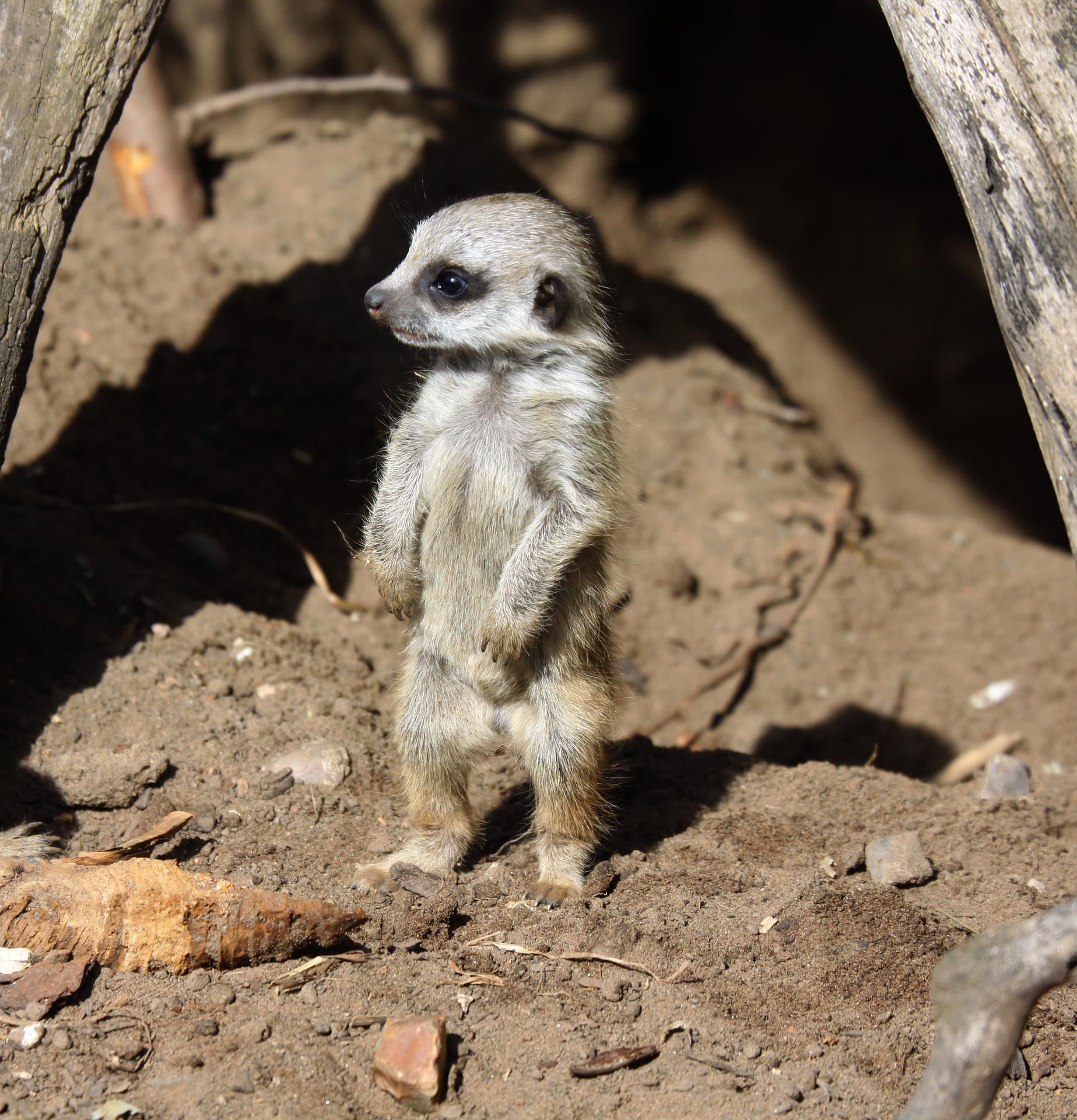 Litters of 4-5 meerkat babies are born between the months of June to October with a birth peak in January-April.

Meerkat babies will come out from the den at 2-3 weeks after birth.

They start feeding independently from 5 months of age. They are sexually mature at I year.

If more than one female in a group breeds, they give birth at nearly the same time.

Dominant females attack pregnant subordinates and may kill their offspring.

Babies less than three weeks old are confined to the den.  All group members take turns babysitting while the group forages. 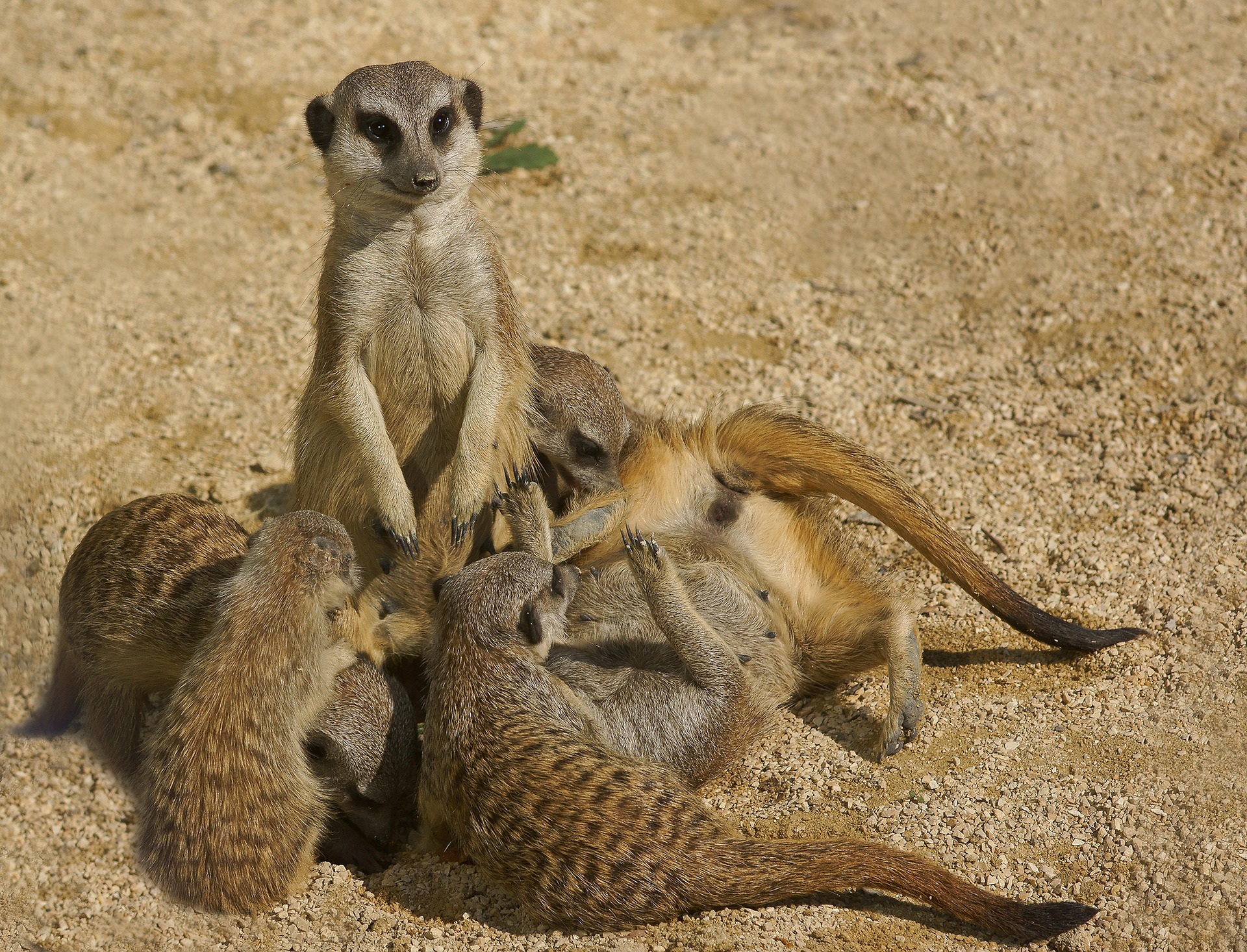 Huddling with the babies to keep them warm and guarding them against predators.

Babysitters go hungry while on duty. But may babysit for three successive days.

Between three weeks and three months, youngsters accompanying the adults on foraging trips are fed by caretakers of either sex.

Immigrants care for youngsters as carefully as group members.

What do meerkats eat? 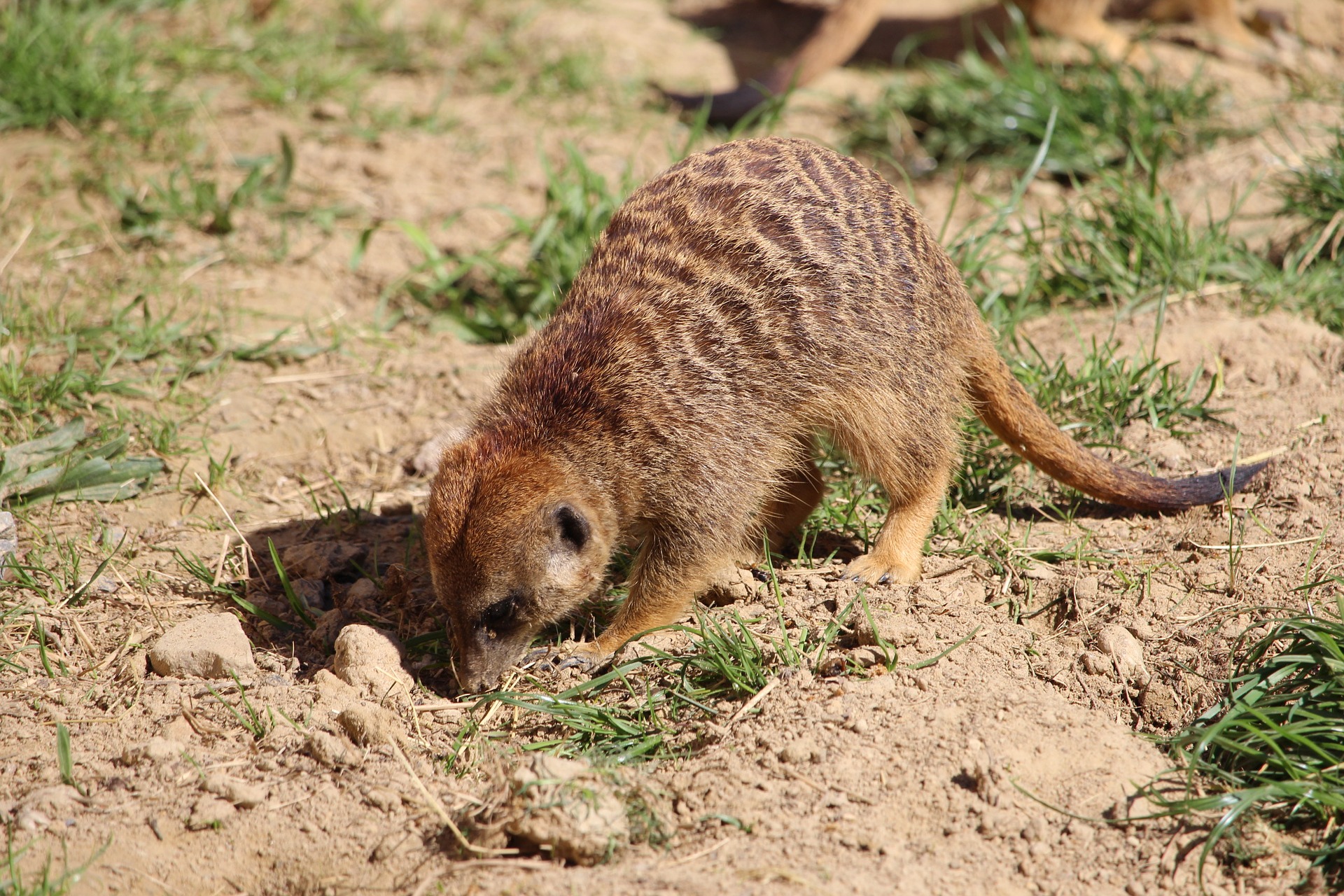 Diet consists of a very wide range of insects (especially larvae) and other arthropods, reptiles, amphibians, and occasionally small birds.

Eats mammals very rarely, if at all. Opportunistic, taking what is most available: in the southern Kalahari insects are 70% of the volume eaten. reptiles 20%. scorpions grasshoppers and crickets 3%.

In Botswana, beetle larvae occur of stomachs. scorpions in 55%. grasshoppers and crickets in 1 7%. beetles in 17%. reptiles in 13%, centipedes and millipedes in 13%, and termites 9%

Interesting facts about how meerkats catch their prey

Meerkats have a sharp sense of smell. They can therefore use this to detect hidden and submerged prey.

Prey is detected by smell and dug up with the forepaws.

Holes may be so deep that the whole body disappears into them.

The foraging pack maintains vocal and visual contact with each other.

Every individual sniffs, scratches, probes, and digs for food. 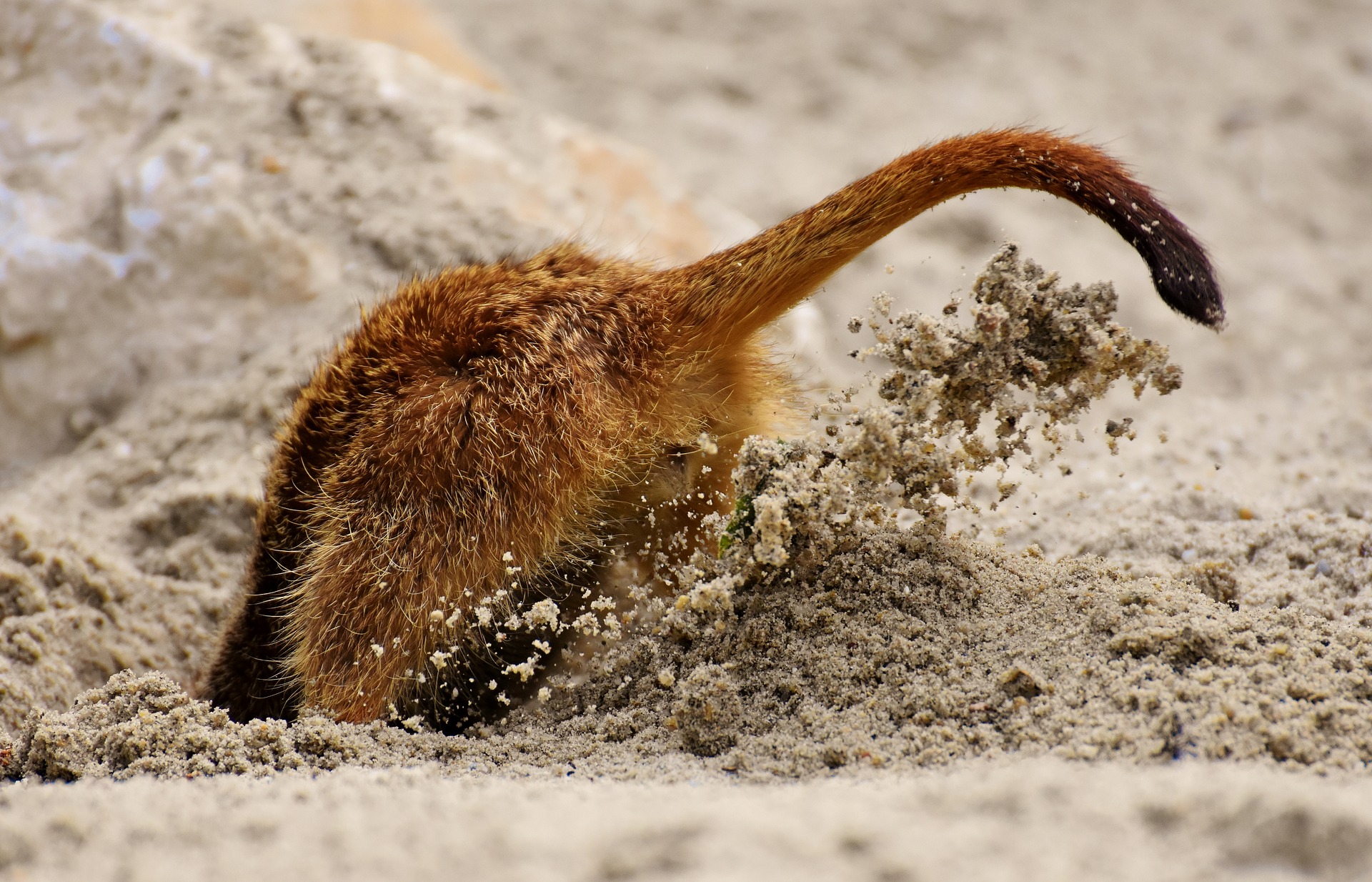 They have an irresistible urge to follow each other in a pack and headed in the same direction.

Large or unfamiliar prey is battered with foreclaws before biting it tentatively, then hard, finishing with death shake.

Rodents, lizards, and birds are dismembered by pulling down with claws while holding prey in jaws and pulling up.

What are the meerkat predators?

How do meerkats survive from predators?

Killed by raptors, snakes and, small carnivores. Infants and juveniles are the most vulnerable.

Ability to spot avian predators at long distances which are mostly hawks and eagles. 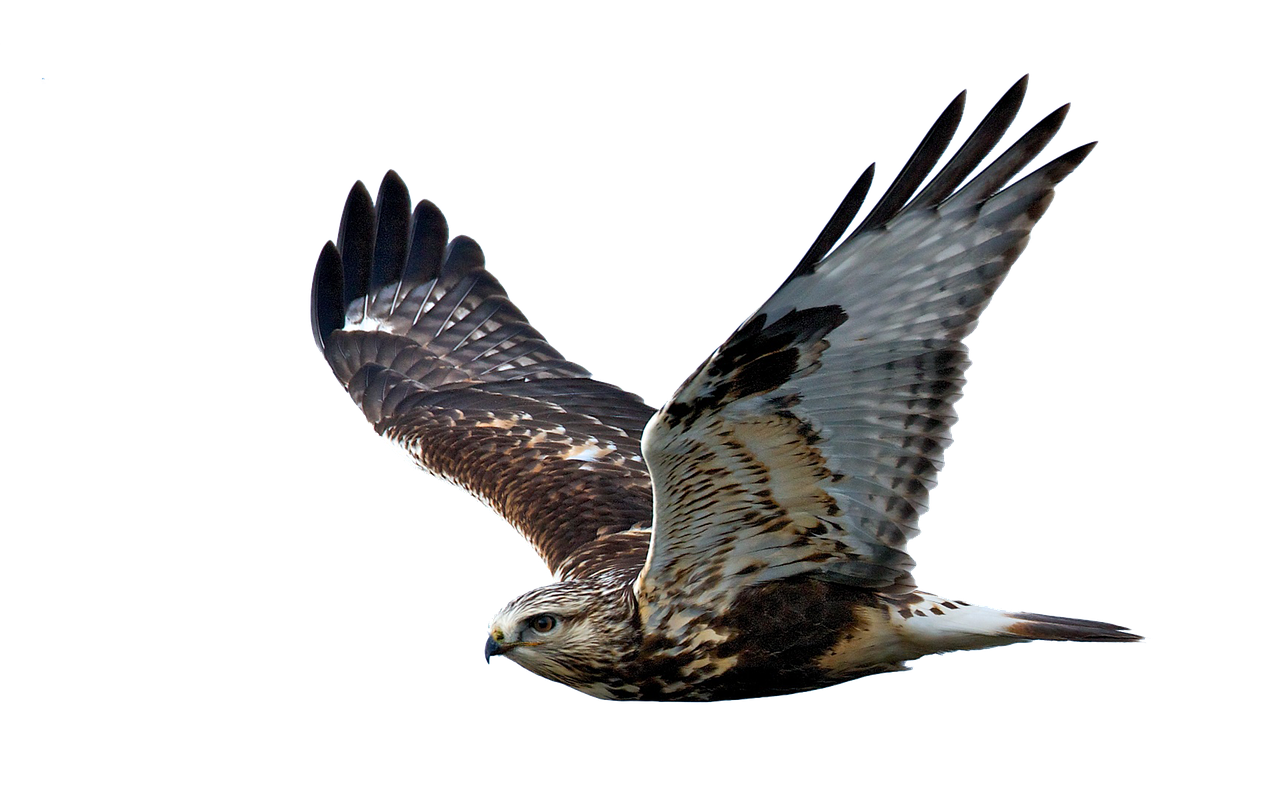 Suricates rely on early warning by a guard standing lookout from a highest nearby vantage point while the pack forages.

This reduces the danger of foraging in the open despite the inability to climb well or run fast. 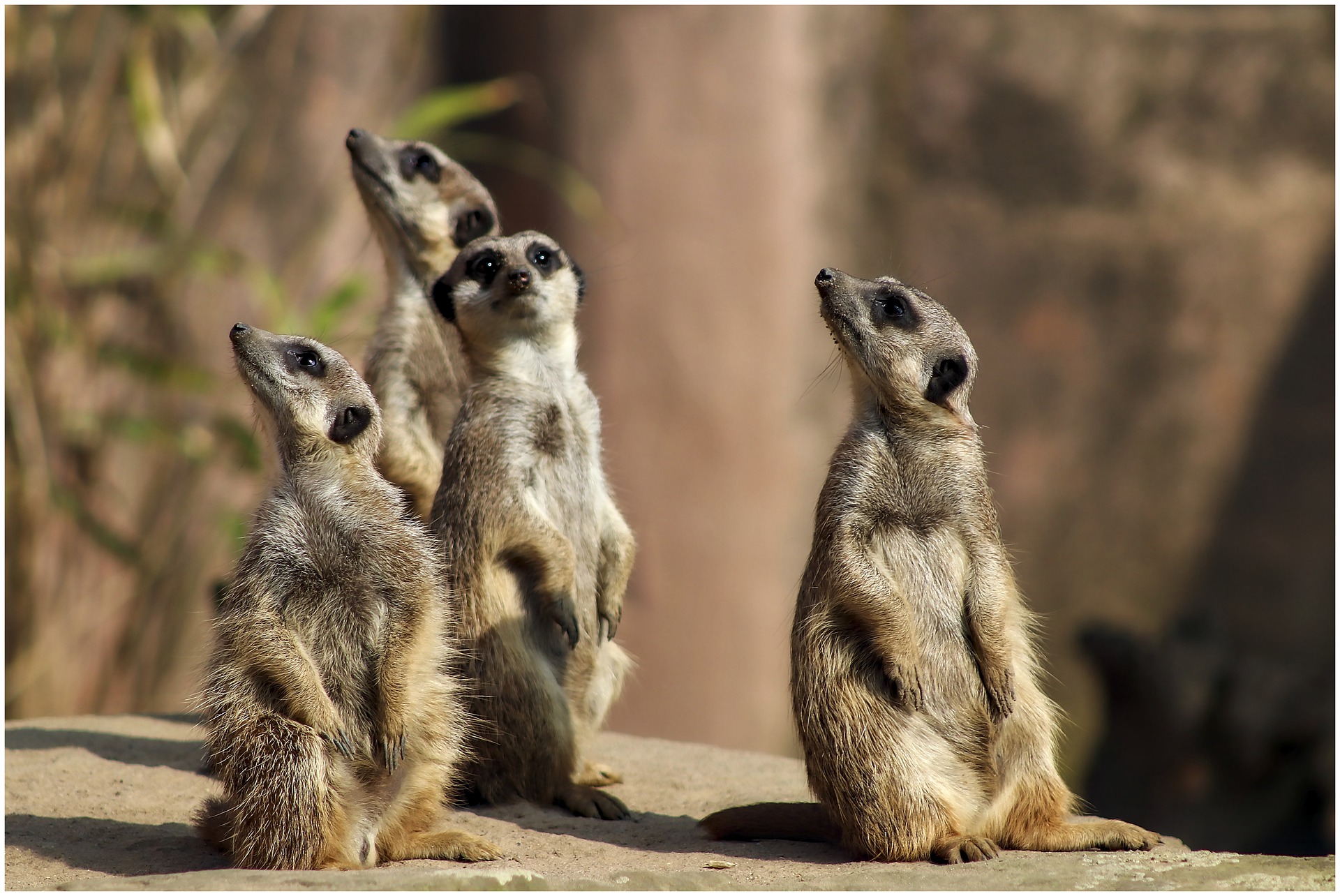 Why is a meerkat always on the lookout?

Very vulnerable to predators while foraging.

The alarm call for raptors is a rasping bark, and for ground predators a hoot. 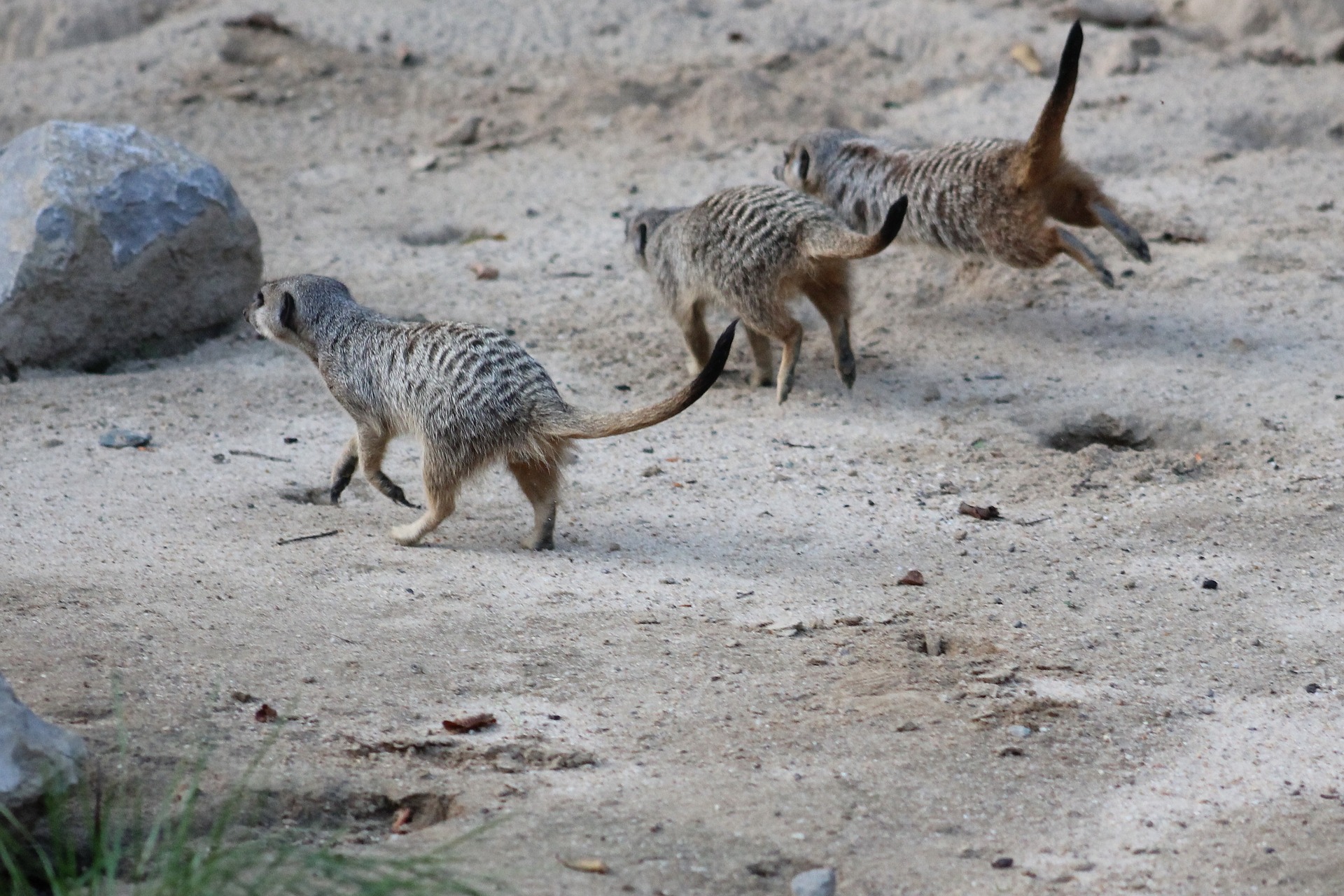 Sessions of sentinel duty are up to an hour or more long.

Snakes, small carnivores, and raptors on the ground are mobbed and harassed.

Jackals are chased off by the whole group advancing in a tight bunch with an exaggerated bouncy step, looking like one big furry animal.

Attacks on predators are led by the dominant male.

The meerkat is presently not endangered.