Want to know some interesting porcupine facts and see photos?

Rodents like porcupines are usually easy prey to a range of predators.

This species has however developed an advanced defense mechanism that makes predators think twice before they consider them for a meal.

Let's have a look at how they do this. 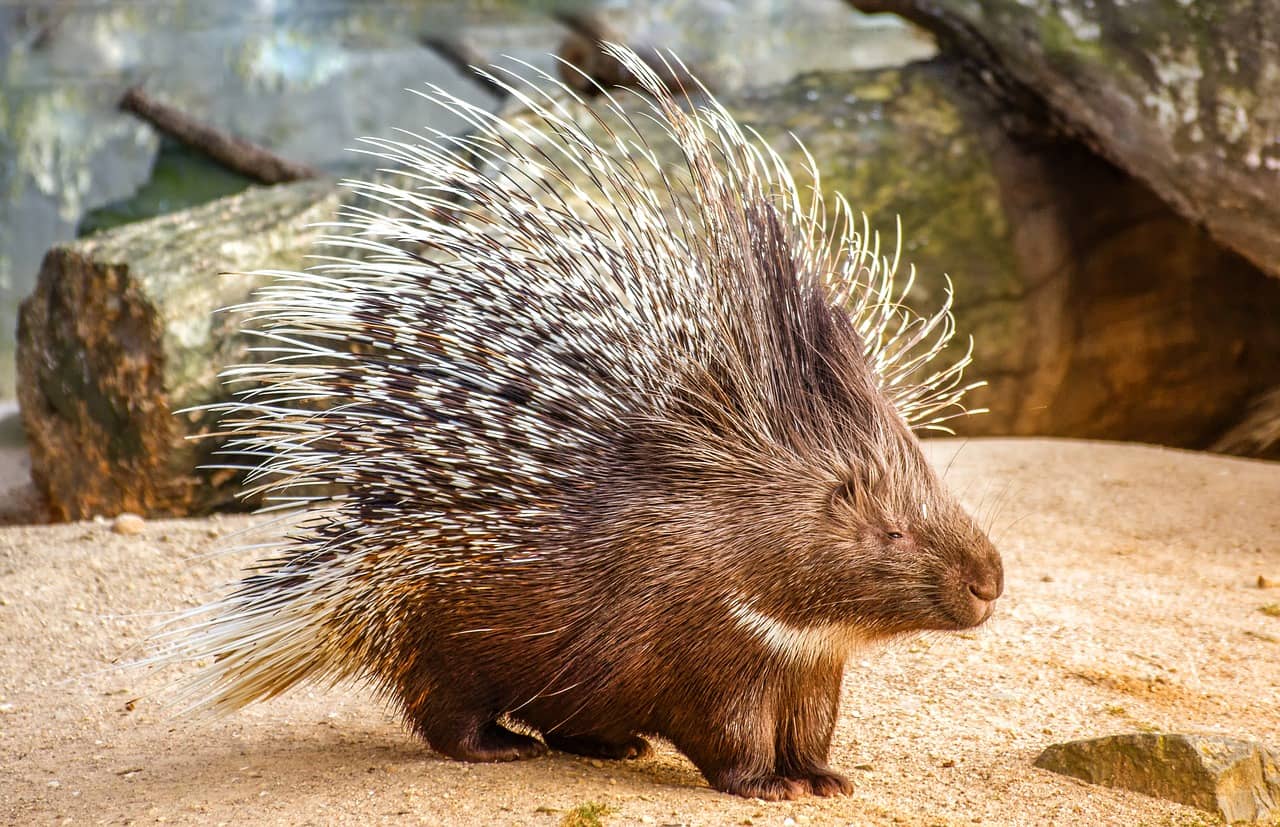 The body of a porcupine is covered by long - up to 60 centimeters pliable spines.

They have a crest of long coarse black and white hairs from the top of the head to the shoulders.

The end of the tail carries a few hollow, open-ended quills.

The legs are short and heavily built with large feet.

Females are heavier than males.

How big does porcupines get?

What do porcupines eat?

Crested porcupine spends most of their nocturnal hours exploring for food

These animals eat almost any sort of vegetable material but prefer roots, bark, fruit, and cultivated root crops such as potatoes and carrots.

They move up to 16 kilometers from their burrows to reach their favorite feeding sites.

They are serious pests in farmland and can do a lot of crop damage in a single night. 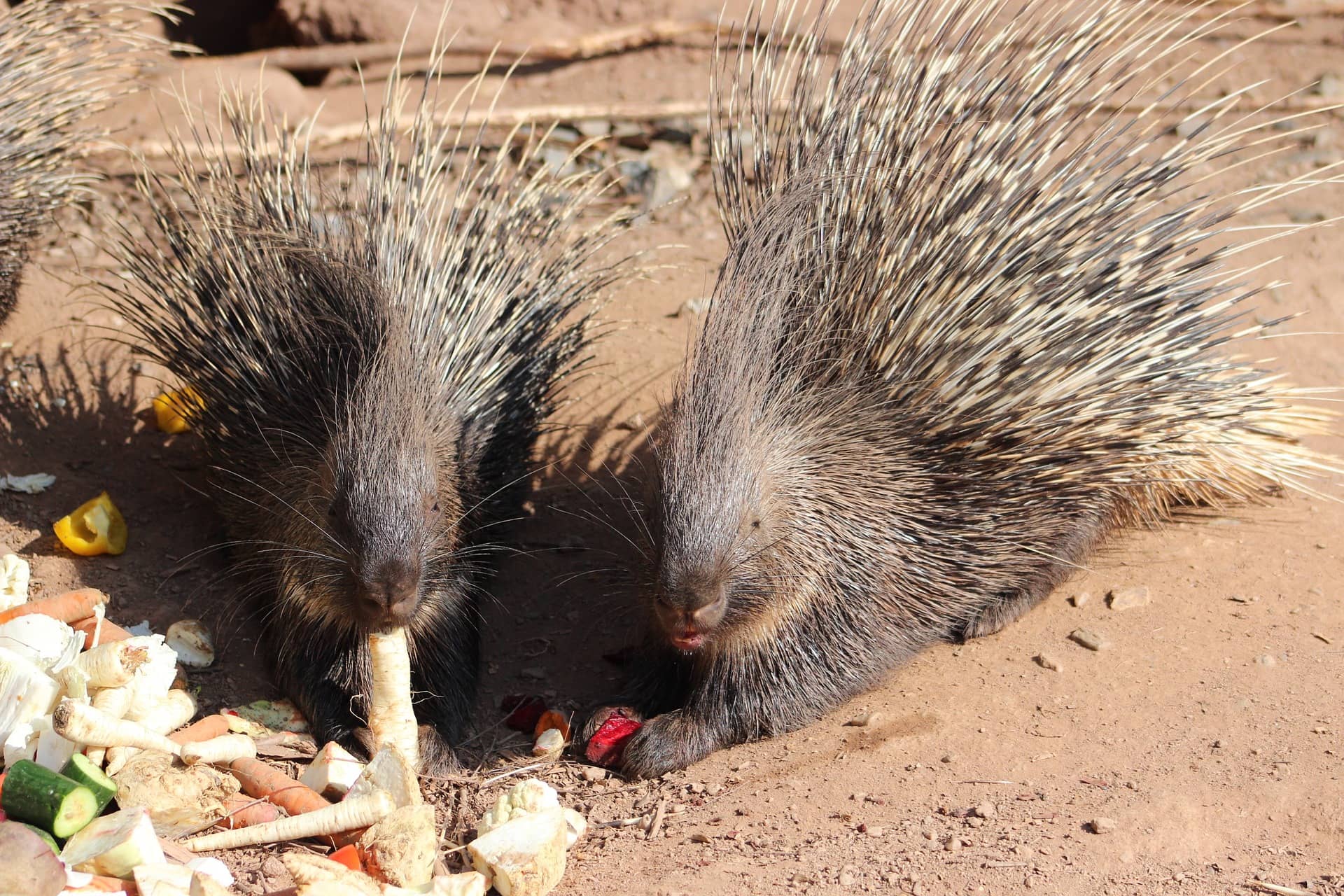 They are very wasteful feeders and will often take a single bite from various crop items like potatoes or pumpkins before it finds one ripened to its taste.

A group of porcupines is called a prickle.

The result is that people in Africa often persecute them.

To protect their crops, these people smoke them out of their burrows and hunt them with dogs.

They carry food back to their burrows to build up a safety stock of food.

They also collect bones, which they nibble on to obtain calcium and phosphorus.

Habitat - where families of porcupines live

Porcupines live in just about any habitat, including deserts, grasslands, mountains, rainforests and forests (except the Namib Desert coastal strip).

They are nocturnal, and almost the only time they are seen in daylight is when they sunbathe just outside their burrows.

They are most common in rocky crevices and caves where they seek safety but they can adapt to most habitats.

They sometimes take over burrows already made by aardvarks or springhares.

They also dig their burrows, which may consist of elaborate systems of interconnecting tunnels and chambers.

How does a porcupine protect itself against predators?

They make little attempt to conceal themselves from potential predators.

They make sniffing and quill-rattling noises that can be heard from several meters.

If a predator approaches, it will first try to escape by running away.

It is unable to protect its head by rolling up like a hedgehog. 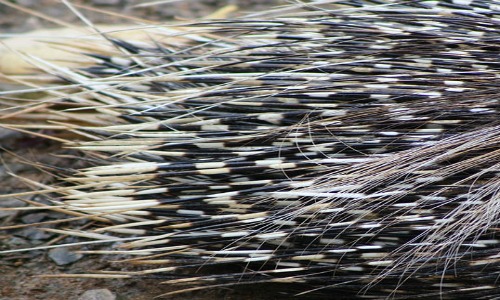 Initially, this little animal warns potential enemies of its defense system by stamping its feet and growling or hissing with a roar.

At the same time, it will shake its tail so that its thick, hollow quills produce a characteristic rattle.

It will also stamp its feet to rattle the quills.

They cannot shoot their quills.

Scenes of confrontation are usually littered with numerous quills lying around after an attack.

This may give the impression that they can shoot the quills.

If the attacker is undeterred by this display and persists to approach closer, it dashes backward at it, trying to ram quills into its paws or face.

This reverse charge is most effective because the hindquarters are the most heavily armed and the quills are directed to the rear.

The quills are usually dirty and can cause infections that can be fatal.

If it succeeds with this tactic its quills pull out of their loose attachment to its skin.

Scales on the quill tips lodge in the skin and if they break they stay in the target that is unable to pull them out.

Their defense can fail against a determined predator that continues harassing the porcupine until it is exhausted.

Lions, leopards, and caracals will hassle a porcupine till it is too exhausted to fight back anymore.

In the Kruger National Park, there is at least one lion pride that specializes in killing them.

They stand little chance against more than one attacker because they can only keep its quills aimed at one of them at a time.

This leaves its head vulnerable to attack by the other.

How do porcupines have sex?

In each group only one pair breeds.

A female initiates mating by backing to a male with her tail held up or to one side. 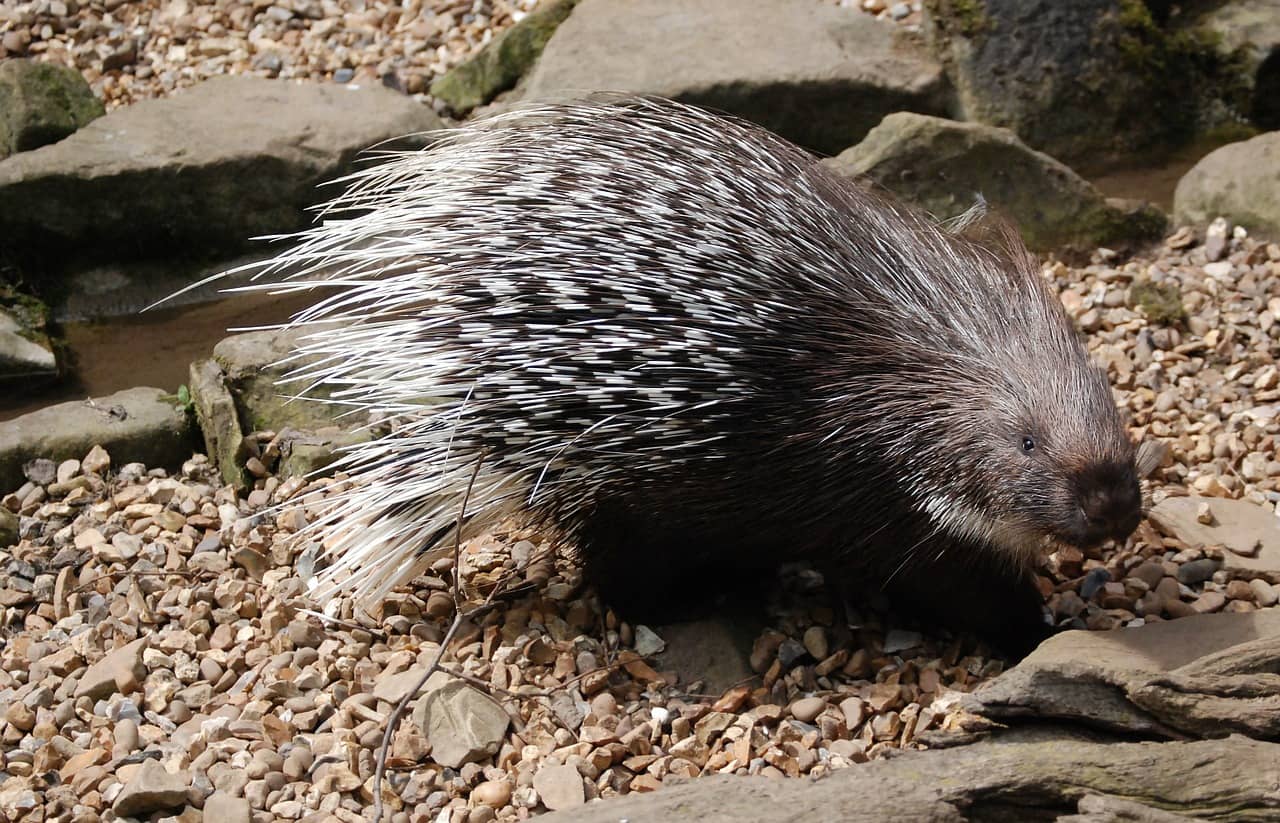 The male mounts upright behind her, supporting himself with his paws gripping the tail for balance.

After mating the male and female groom each other.

Porcupines in Africa mates between May and December. The gestation period is 94 days. Most births occurs from August with a peak in January.

These are one of the very few mammals that have sex on a frequent basis outside the female's fertile period.

This is probably important for maintaining pair bonds and social organization within a group.

One baby is born at a time. It is suckled for three months', and eats its first solid in about a month.