Have you ever wondered:

Then you'll love the interesting facts and elephant pictures we have for you. 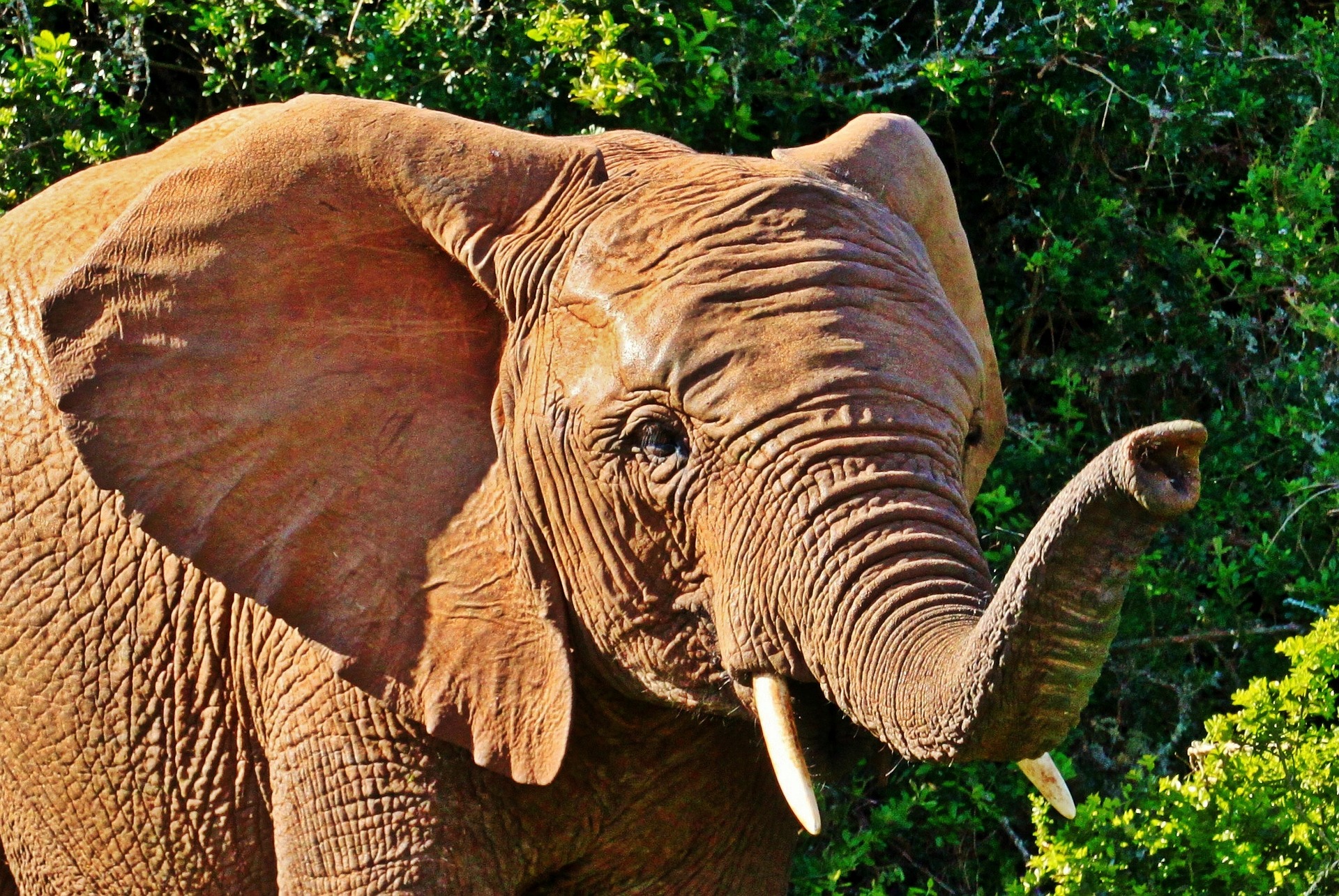 The African elephant is possibly the world's most versatile herbivore.

Equipped with its unique trunk which is an all-in-one multi-purpose tool used for grabbing, smelling, drinking, and broadcasting.

The African Elephant is revered as a symbol of strength and power in Africa. Its size, long life span, and devotion to family life are admired.

The elephant trunk can twist around and pull up grass, pick up small items like seeds, and remove branches from trees.

The elephant tusk is another handy tool they are equipped with. Very useful for tearing tree bark loose and digging holes for water. 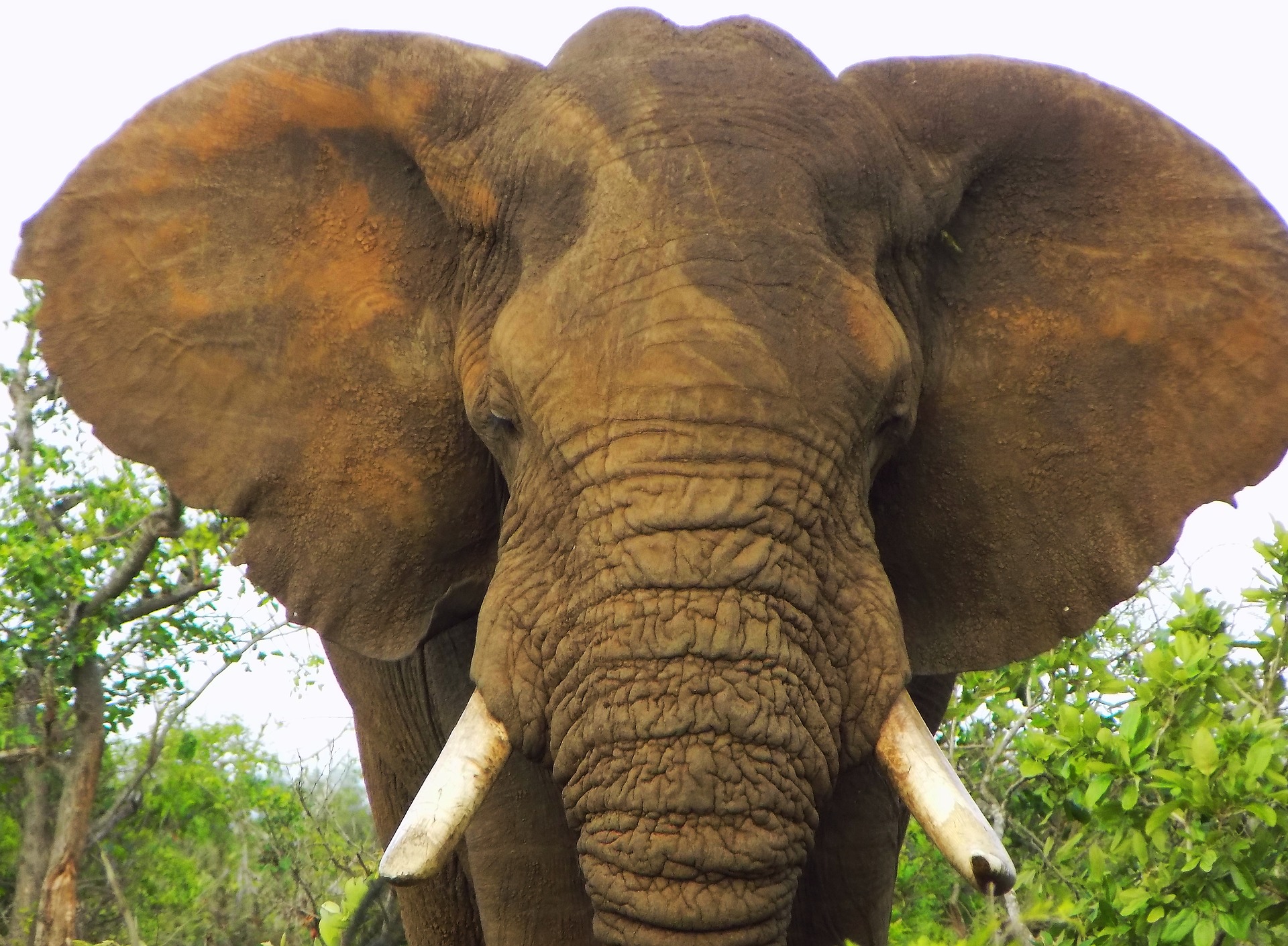 Why is the African elephant usually seen as part of a herd?

The basic stable social unit among African elephants is a group of closely related adult females with their young of various ages. 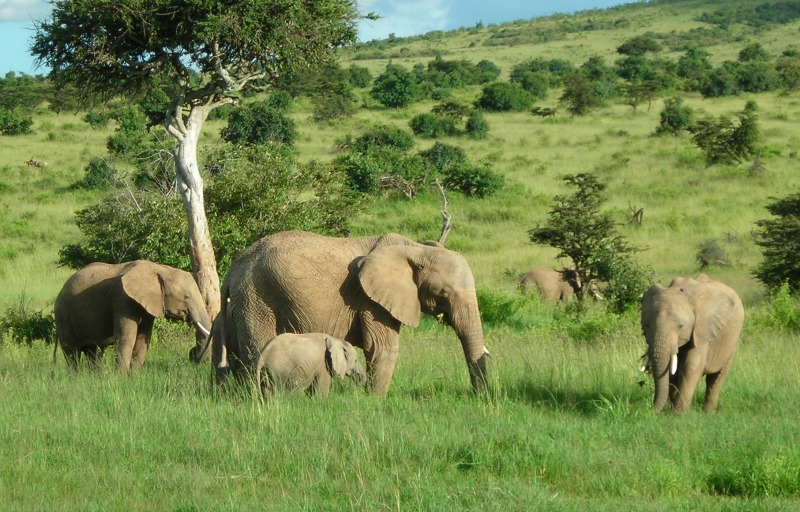 The movements of a family group are directed by the oldest and biggest cow (often referred to as the matriarch).

This would typically be a female that has accumulated her necessary experience over 30 to 40 years.

This female will make most of the decisions about where and when the herd forages, drinks, and rests.

If these old cows are shot during an elephant hunting their knowledge is lost and the rest of the group will wander aimlessly. 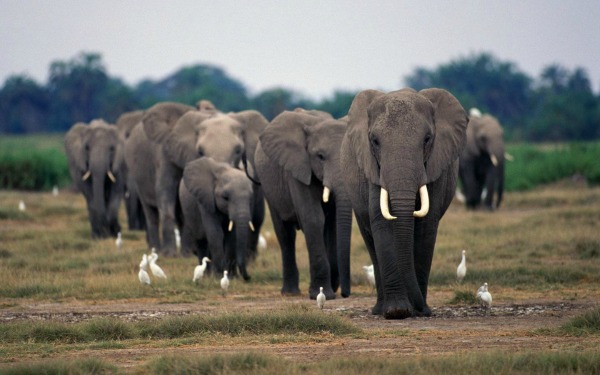 Two or three younger apprentices known as askaris may accompany an old male.

The members of an African elephant family group take good care of one another. If one of them is sick or injured others will stay with it to defend it.

The calves get especially close attention. The adults help them climb steep banks and will protect them from predators.

Elephant ears are mainly used to cool the body off. It's also useful to rid themselves of irritating flies.

If elephants flap their ears is therefore not always an expression of anger as is commonly assumed.

An animal of this size, with no sweat glands and dark body color, can easily overheat in African conditions.

Besides their natural cooling mechanisms of standing in the shade, resting at midday, and coating the body with mud, soil or water, elephants have another trick. 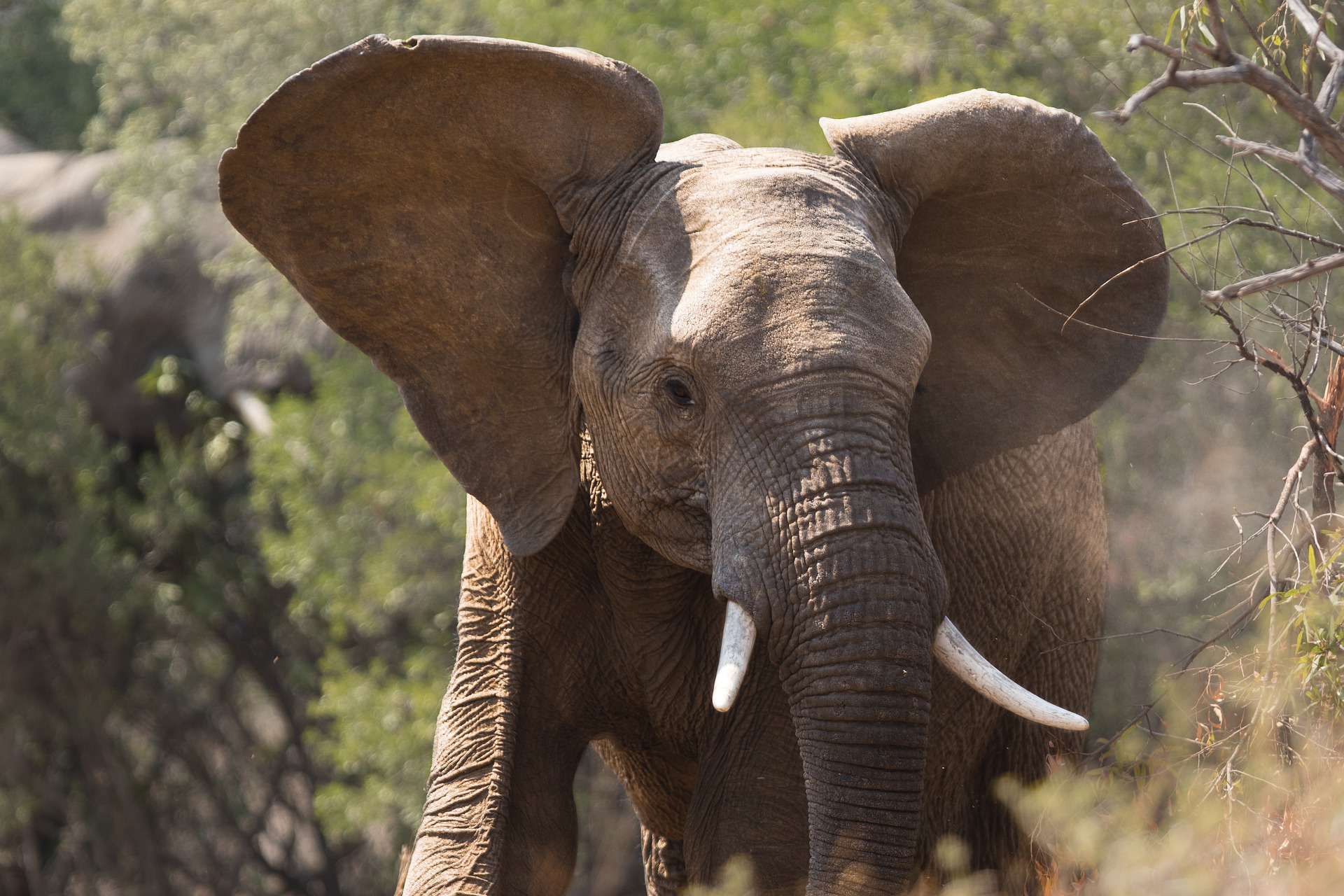 The ears are lavishly supplied with blood in a substantial network of veins that dilates when the weather gets hot.

The skin of elephant ears is fairly thin. The total surface area of two ears could account for up to 20% of the entire body surface area.

The blood flowing rapidly through the veins and capillaries is enough to allow heat to dissipate.

Heat loss and blood cooling are significantly enhanced by the flapping which causes cooling currents of air to pass over the veins.

Elephants have poor eyesight with a range of only 25 feet. 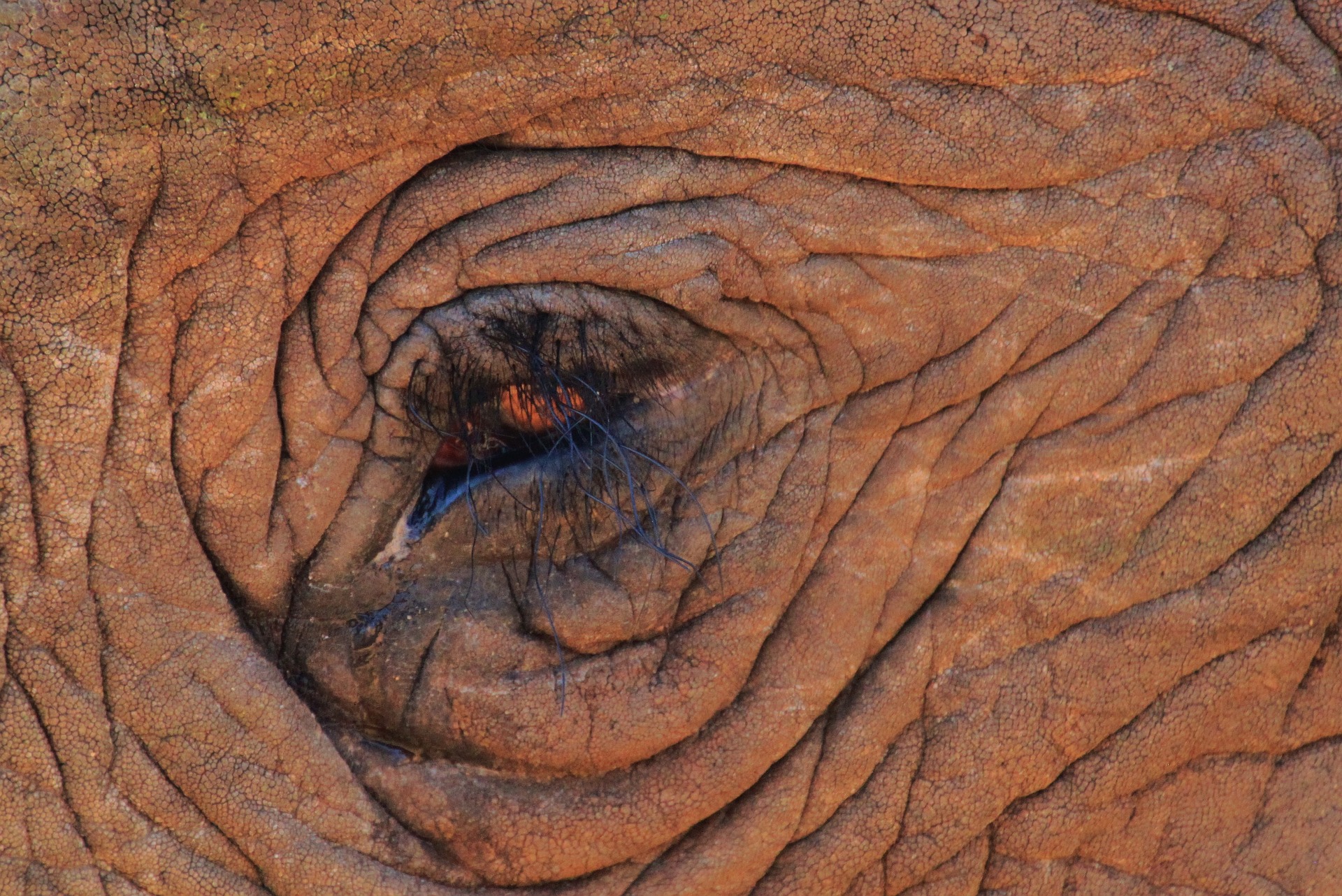 Elephants' eyes are relatively small. Considering the position and size of the head and neck, they have limited peripheral vision.

Elephants can see well in the dark.

How do elephants use their trunks?

The trunk is essentially a modified nose made of muscle.

The elephant trunk has evolved and can be used for various functions. It is a modified nose.

With this tool, an elephant can do a variety of things from picking up a small maroela fruit or berries to picking up a massive tree trunk.

When you look closely at the trunk you will notice hairs on it which makes it sensitive to touch.

It is believed that an elephant can distinguish smells several hundred times better than any dog with its trunk.

The trunk is important for social interactions among the herd individuals and used for caressing - especially between mother and calf.

Other social interactions may include greeting and demonstrations of dominance or submission via various trunk postures.

What does an elephant use its tusks for?

Tusks are mainly used to dig for specific food items like tree roots and also for defense.

In encounters during fights for dominance, they can use tusks to stab opponents. 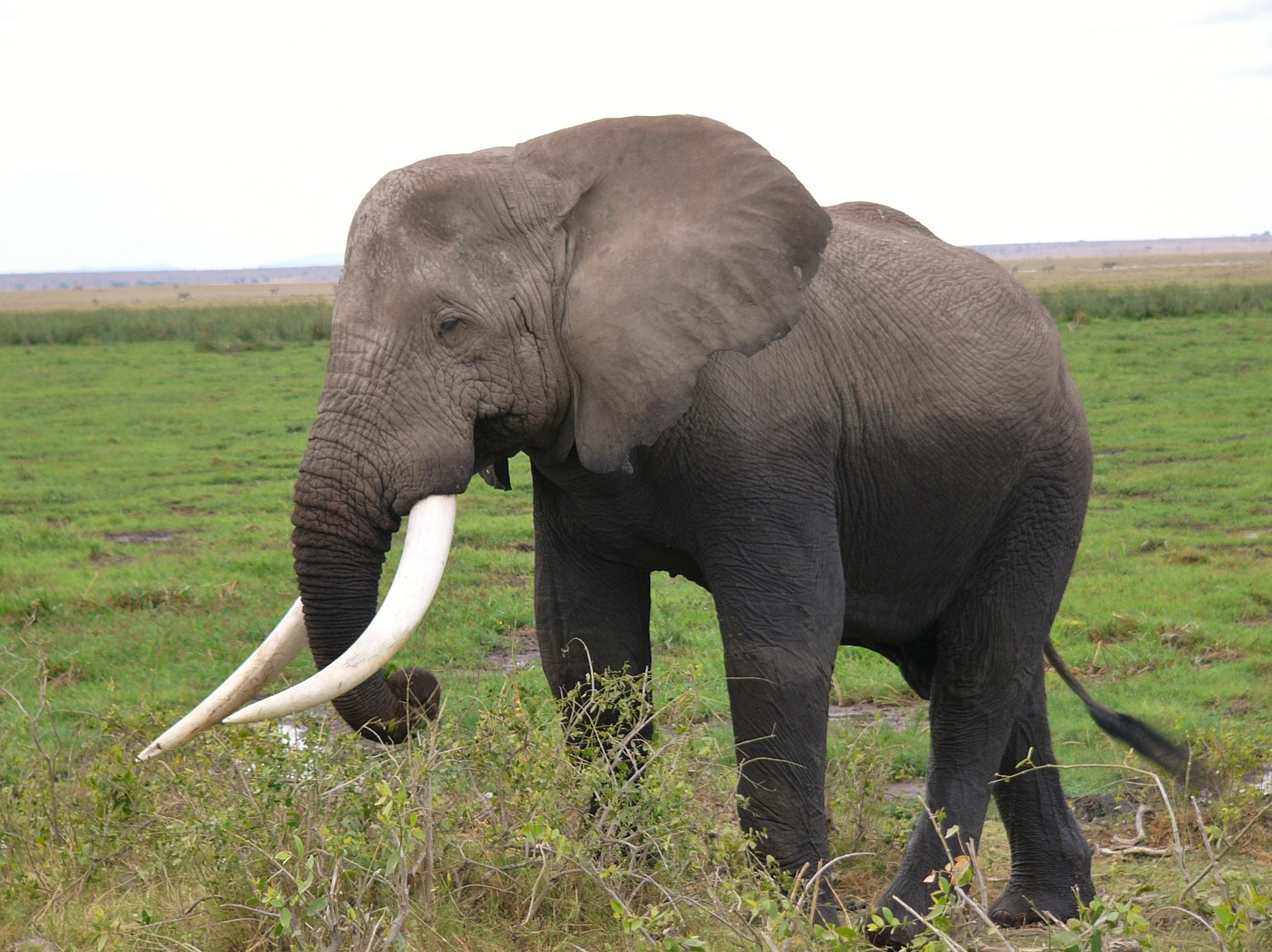 Older adult elephants will therefore have the biggest tusks which make them the priority targets of ivory poachers.

Adult elephants often incline to use one tusk more than the other. This could result in differing tusk lengths.

Sometimes a difference in the length of tusks is the result of breakages.

What are the differences between the African and Asian species of elephants? 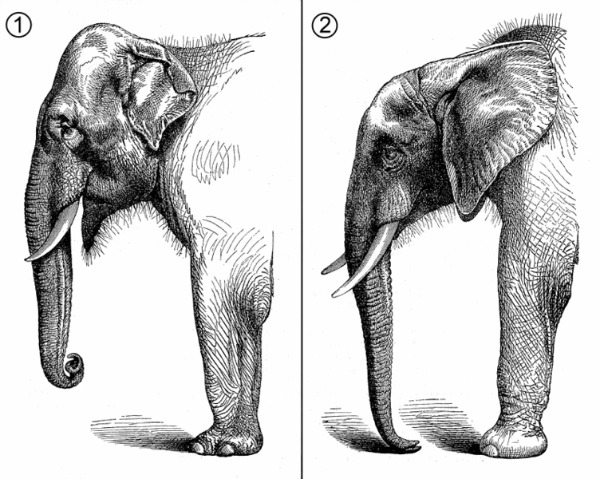 The African elephants have extremely large ears that can be likened to the shape of the African content.

Similarly, the smaller Asian elephant ears can be compared to the shape of the Indian subcontinent.

In the case of the African species, both males and females have visible tusks.

With the Asian species, only males have obvious external tusks.

The females have small tusks that may or may not protrude far enough to be visible.

The Asian species has one semi-prehensile "finger" to its trunk while the African specie has two of them. 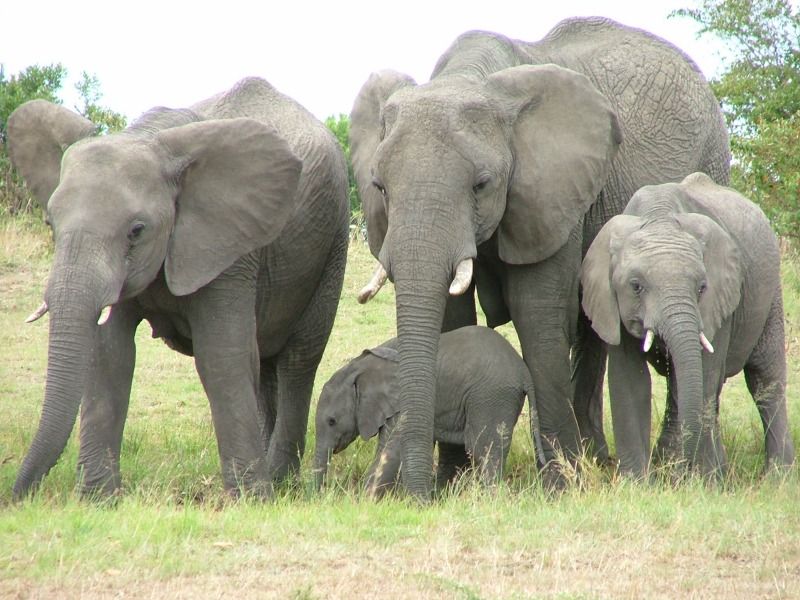 Elephants that swing their tales from side to side are trying to keep the flies off their body and this usually means it is happy and relaxed.

How do elephants breed?

Unlike hippos that rely on the buoyancy effect of water for copulation, the African elephant bull does mount the female in a conventional manner on land.

Elephants breed throughout the year.

Males younger than 25 years old are unable to compete for access to females on heat.

From the age of 25 bulls periodically goes into musth as their testosterone levels rise to six times the usual level.

At this time they walk with their head high and they become very aggressive towards other males, which avoid them. 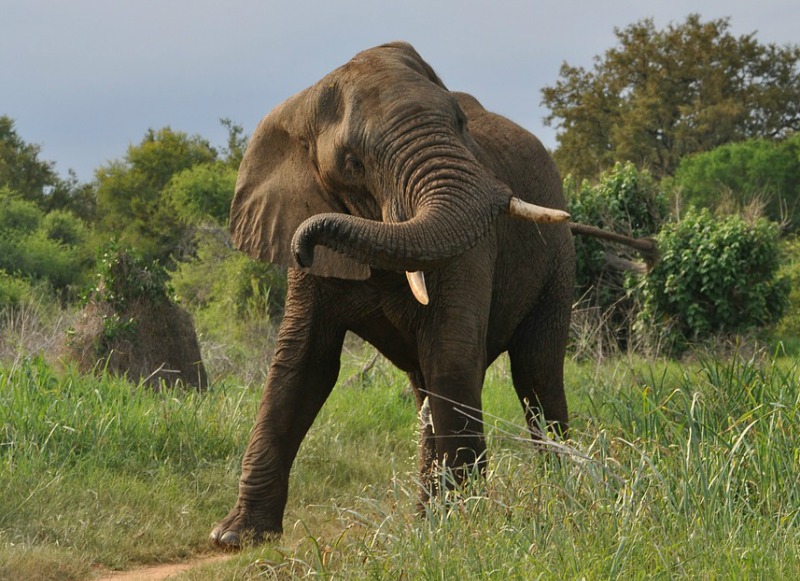 Musth bulls will fight to the death over access to females.

In the restricted area of the Addo elephant park, musth bulls kill young males often enough to slow the growth of the population.

Younger members of the herd act as nannies to calves but all family members take full responsibility for the protection of the calves.

Between 25 and 35 years they mate, in the female oestrus period when conception is unlikely. 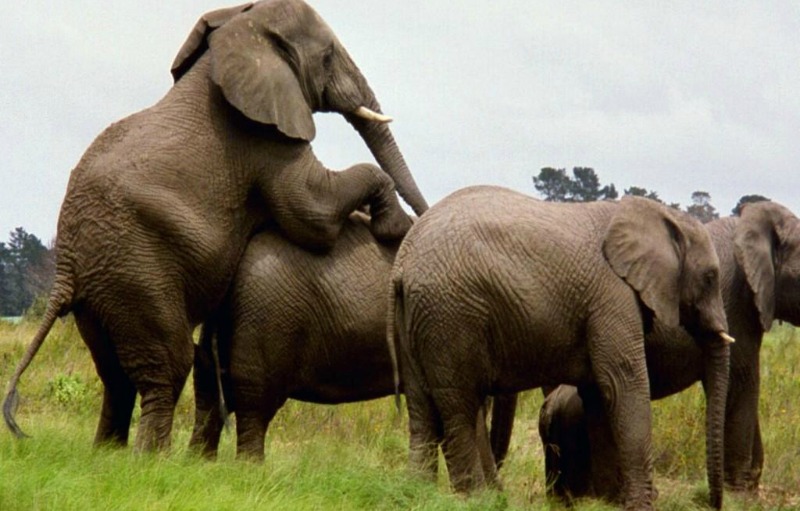 Males older than 35 years guard and mate with females at the most favorable time for fathering a calf.

Female elephants have a longer pregnancy than any other mammal—almost 22 months. Cows usually give birth to one calf every two to four years.

When it is time for labor contractions increase as the labor continues.

It is possible for a female elephant in labor to interrupt the birth if it occurs during the day.

What are some interesting baby African elephant facts?

Baby elephants can stand and walk within an hour of birth.

Baby elephants begins to nurse within a few minutes, using its mouth, not its trunk.

An elephant calf is suckled for at least two years and even after weaning it remains closely bonded to its mother.

When a baby elephant attempts to suck from lactating females other than its mother it will be repelled - usually with a vigorous slap from the cow trunk.

If a baby elephant loses its mother the other females in the group will take care of it. 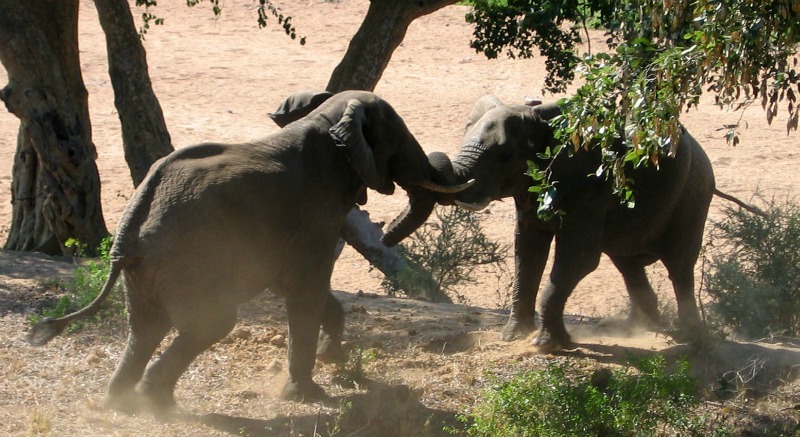 Young elephants play by splashing and spraying each other with water and mud.

They also wrestle with their trunks and practice fighting in pushing competitions.

They also mock-charge other species such as antelope.