What will help stop the slaughter of our rhinos?

Several desperate efforts to present solutions to rhino poaching are currently being explored.

Brutal rhino poaching methods have escalated in South Africa, which is currently home to about 70 per cent of the remaining rhinos in the world.

How do we stop this slaughter? 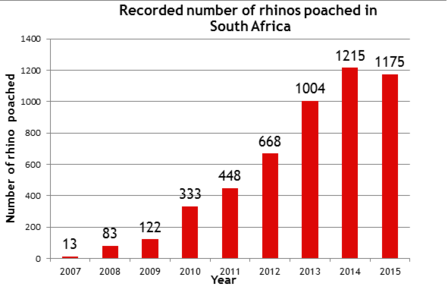 The great rhino population conservation gains of the last two decades will be wiped soon at this pace!

Where does this problem start?

CITES has identified Vietnam as an important destination for illegal rhino horn products.

China and Thailand have been identified as the two biggest consumers of ivory in the world.

The CCAOM represents fifty-two acupuncture and Oriental medicine colleges across the United States.

This issue has never been more visible with many opinions flying around.

There is currently numerous proposals in the pipeline and some heated debates  which include the ones we listed below:

First of the suggested solutions to rhino poaching:
Dehorning the rhinos

The suggestion here is that surely by simply removing the horn - the rhinos should be worthless to poachers. However unfortunately it seems the solution is not that simple.

Namibia was the first country to try dehorning.

Between 1989 and the early 1990s, dehorning in addition to improved security and funding of anti-poaching efforts resulted in a significant reduction in rhino losses.

In this case study not a single dehorned rhino was subsequently poached.

Emerging question: so is this the way to go?

In Hwange National Park, Zimbabwe during the early 1990s, the majority of dehorned rhinos were killed just 12-18 months after being dehorned.

This is attributed to the stub of horn that is left after removal.

The brutal facts are that poachers will still kill for a horn stub due to its high value.

Some experts also think that poachers may also kill dehorned rhinos out of vengeance or to avoid tracking them again.

It is also believed that if the rhino is located in thick bush -  the poachers may not be able to see if the rhino has a horn before shooting it anyway.

Second of the suggested solutions to rhino poaching:
Legalizing the trade in rhino horn

This is certainly one area where opinions are divided and exchanges get heated.  Let's have a look at some of the main arguments on both sides.

One of the main challenges here are that nobody can predict how legalizing trade will affect the behavior of the end users in Asia.

Many conservation groups have expressed concern over the concept of legalizing the rhino horn trade.

One key issue regarding this solution to rhino poaching will be to understand how the trade in rhino horn will be regulated.

History shows that occasional sales of elephant ivory have not reduced poaching for ivory.

One of the main reasons for their opposition is that they don’t think it will be enforceable.

This is because markets where the trade would be active like in Vietnam simply do not have the necessary enforcement regimes in place.

This debate is growing in intensity and also becoming more polarized between the pro- and against factions.

Third of the suggested solutions to rhino poaching:
Educating the end user in Asia

Like we stated above - Lixin Huang president of ACTCM have been quoted as follows:

‘‘There is no evidence that rhino horn is an effective cure for cancer and this is not documented in T.C.M. nor is it approved by the clinical research in traditional Chinese medicine.’’

So what is the problem here?

The Chinese beliefs were reflected in an interview conducted with a retired Traditional Chinese Medicine practitioner.

According to this practitioner, rhino horn is used as an emergency medicine used especially for very young children.

" A tiny bit of powder is mixed with other herbs and gypsum to save a life and lower temperature".

He claimed that the Chinese people were not concerned with the  death and suffering of the animal if it could save the child.

He also stated that many things could be used instead of rhino horn including a range of herbs and roots.

Other solutions being debated currently:

Prediction - it is going to get worse

Taiwanese millionaires are well known for their consumption of rare and exotic wildlife and believe that animals exist primarily for exploitation.

The demand is increasing and wealthy Taiwanese  being aware that prices are likely to increase even more as the rhino numbers decline.

These buyers are now buying it as part of an investment strategy.

There is no single solution.

Some of the suggested solutions to rhino poaching like legalizing the trade in rhino horn presents more questions than answers at this point.

It is clear that only a combination of approaches would need to be considered.

What do you think?

If you have an opinion on this matter please leave us a comment below.