Host to the "Greatest show on earth"

The feature stars of this show are the wildebeest accompanied by the zebras.

Every year of their lifetimes is chase for the rains in a race for life across the open plains of the Serengeti national park and Kenya’s Masai Mara game reserve. 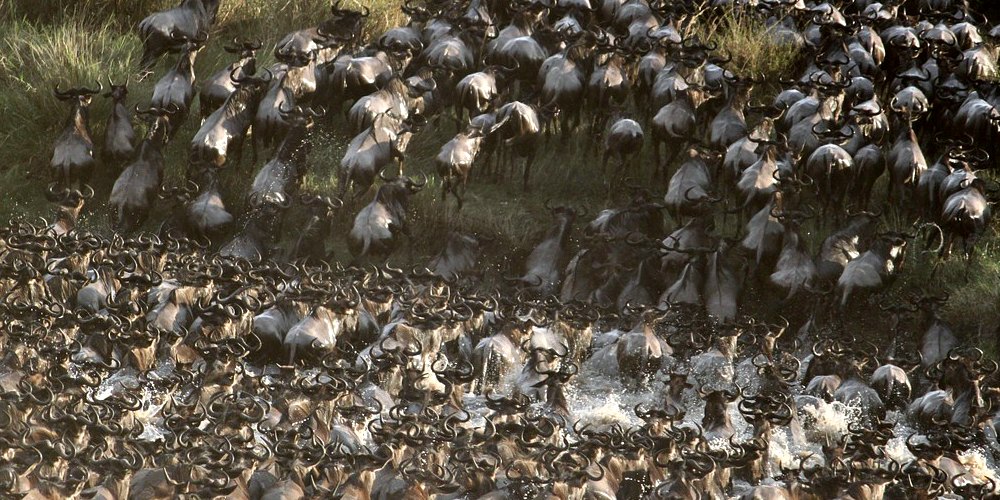 The wildebeest migration is rated as one of the world's most spectacular natural events.

The Serengeti National Park famous for its annual wildebeest migration, is a vast and beautiful park with huge numbers of wildlife.

Some estimates indicate that the Serengeti ecosystem contains up to- 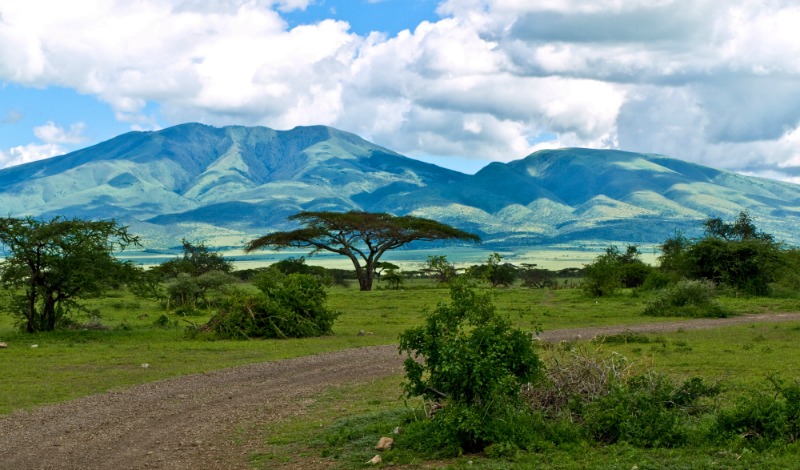 A high density of leopards, cheetahs and lions pursues these large herbivores populations.

The Serengeti National Park can be geographically divided into four areas:

According to African legend the wildebeest has been put together by God using leftover spare parts.

The amazing spectacle of the wildebeest migration is part of a continuous and unpredictable cycle in a very dynamic ecosystem.

The migration is obviously defined by the long lines of wildebeests taking part.

These ungainly animals are however very fit for its migratory lifestyle.

To survive, the wildebeests need to follow the rain and the resulting food and water resources.

We do not know exactly how, but it has been proven that the wildebeests can locate rain from over 50 kilometers.

It is usually something along the following time lines:

The animals are usually in the north of the park August to October.

They head south in November and December. 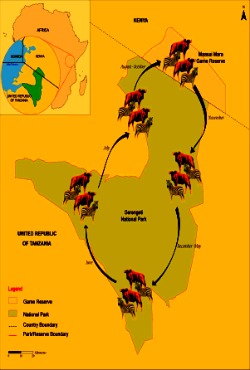 During the December to June rainy season the grass growth is good and the nutrient content high.

The wildebeest will be in the southeast of the park until May.

Then its north again via the Western corridor through June and July.

Rain stops in June, the plains dry out and the wildebeests move west towards Lake Victoria.

Through migration the wildebeest and zebras can best use the resources of the Serengeti National Park ecosystem and build up their populations to vast numbers.

In November, when the rain clouds usually gather in the south, the wildebeests again cross the Mara.

They move through the eastern Serengeti and Loliondo, to again return to the short-grass plains of the southern Serengeti in December.

The river crossings take place around June every year.

The sight of thousands of animals plunging into waters infested with some of the biggest crocodiles in Africa is the last surviving great migration.

From December to February the various animals give birth.

The calving season is short and usually occurs January to March in the southern plains of the park. 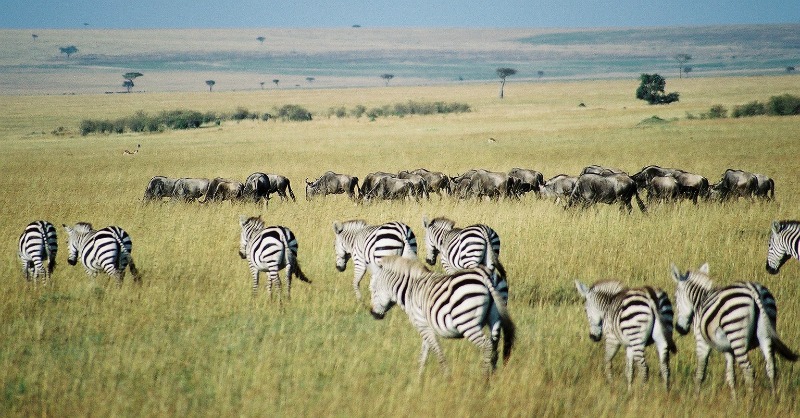 This off course is a magnet for predators.

April to May is when the main rainfall occurs and is low season for the camps and lodges in the Serengeti, many of which close at this time.

Take note that if the April to May rains have been good, the migration can move very slowly from the Seronera, to reach the rivers only by August.

The Wandamu river in Seronera is believed to hold the highest density of cheetahs.

Because you do not have the obstructions of many trees in this area you are virtually guaranteed a sighting.

Visitors obviously would like to coordinate their stay with the animal movement at this time.

Be aware that the lodges and camps cash in on this fact, and that the peak season does not come cheap.

If your budget is limited we suggest you stay at the large lodges in the central plains.

These lodges are surrounded with stable animal populations, which means that your game drives are usually very productive.

Most people enter the Serengeti through the Naabi Hill gate in the Southeast part of the park.

The short grass plains in this area stretch right into the north of the Ngorongoro Conservation area.

You will notice that the area is interspersed with a number rocky kopjes and acacia woodland.

In the dry season animals are a bit scarce here because of the lack of water.

The exception will be the gazelles that are not water dependent and consequently stick around throughout the year.

This scenario changes after the rains arrive in January to April when there is an abundance of zebras, wildebeest and gazelles wildlife in this area.

Because there is so much food and water around at this time the wildlife will be widely dispersed.

These short grass plains become more varied when you go from the Naabi area to Seronera which is located in the central Serengeti.

The drive from Naabi Gate to Seronera will take you around 1 1/2 hours.

The Seronera valley has a network of rivers that can sustain a very varied wildlife population with great game sightings virtually guaranteed all year.

You are likely to notice more cokes hartebeest, topis and ostriches in the valley area.

Most the big commercial lodges are located in this area.

At the Seronera wildlife lodge you can book a hot-air balloon safaris.

Balloon safaris are a great way to see the Serengeti National Park.

Only three balloons operating at any given time.

If you want to do this it requires that you need to overnight at one of the lodges or camps in central Serengeti.

The balloon safari involves an early 5am wake-up call and typically lasts about an hour before you descend to a delicious champagne breakfast. 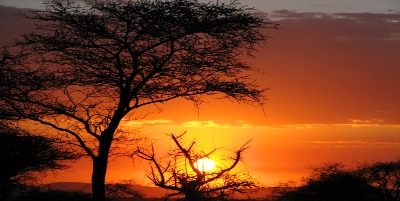 When you do a balloon safari you should notice that the granite crops of the Simba Kopje area usually have more elephants and Masai giraffes.

When you float above the vast Serengeti plains tinted orange by the rising sun, you should spot more elephants, waterbucks, bohor reedbucks as you pass the Seronera river.

Search for leopards in the branches of the sausage trees along the Seronera river.

Is it a fact that leopards are the most difficult cats to spot when on an African safari?

Although they are nocturnal the leopards in this area is not too difficult to spot.

Many people are hoping to see the lions and your chances of seeing them are very good. They usually spend their days laying about in the shade. 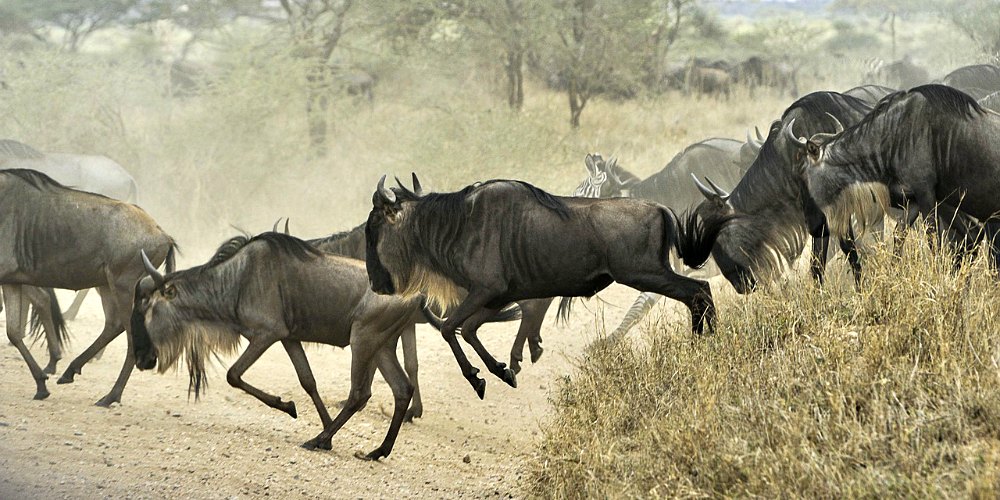 About 5 miles north of Seronera, the Seronera and Orangi Rivers converge to form the Retina Hippo Pool.

A bonus here is the fact that visitors are permitted to leave their vehicles to view the +- 200 hippos on foot from the riverbank which is about 10-feet above the pool.

Hippos are usually placid creatures in the water.

Be warned that this can change instantly on land where they can become very aggressive if anybody gets between them and water.

The northern part of the park is far from the main entry gate in the south. This means that this area receives fewer visitors.

Even when the migration passes here between about August to October you can be witness to spectacular river crossings with no other vehicles around.

If you want to see buffaloes and elephants in large numbers the northern part of Serengeti at lobo is a good place to look.

The trees in this area provides the elephants with food in the dry season.

One area to consider for a visit is the Lamai wedge between the Mara River and the Kenyan border. The reason to visit here is because of the fact that off-road driving is allowed.

The buffaloes are very dependent on water and will usually be found within 20 kilometers of a water source.

Around May the vast migratory herds start to form and head from the Serengeti Plains to the Western Corridor.

In the western corridor of the Serengeti National Park two rivers, the Grumeti and the Mbalageti, run almost parallel both supporting a band of evergreen forest. 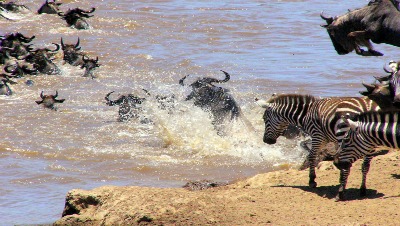 The Western Corridor is less busy than the central plains but sustains relatively good permanent game population with its varied landscapes.

The area, however, really comes alive during June and July, when the Grumeti River crossing occurs through the crocodile filled waters.

At this time you will see plenty of wildebeest and zebras in the Serengeti national park as well as all the predators.

You can also expect to see forest specialists like colobus monkeys and good birdlife.

Have your say about what you just read! Leave me a comment in the box below.