Gemsbok – Want to discover some fascinating facts and see the photos?

The Gemsbok are often said to embody the spirit of the desert.

These antelopes are desert specialists without equal.

What is a Gemsbok?

This is a large African antelope (Genus Oryx). 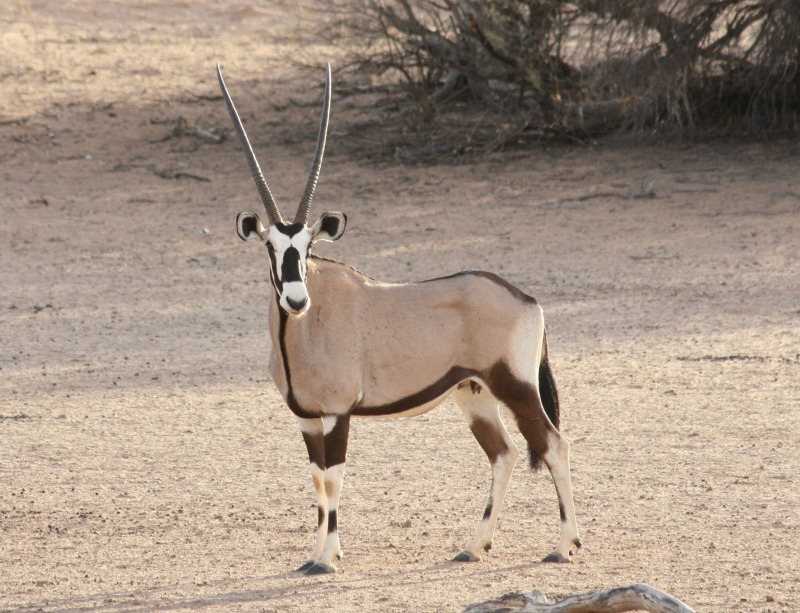 
Color is a pale fawn grey.

White on the belly and inside the legs.

There is a black stripe down the spine.

They have a black patch on the top of the rump.

All four legs of this antelope are black on the top halves and white below the knees.

The tail is black with long hairs at the end.

They have distinctive black and white markings on the face, white around the mouth and the nose, black on top of the muzzle.

A black band runs from the front of the ear through they eye.

The live in arid grasslands and rocky deserts as found in the Kalahari-sandveld.

These African animals are mainly grazers but they will browse on bushes and forbs if there is no grass available.

They eat wild tsama melons for their water content.

They obtain minerals by eating soil.

They graze for long periods at night when the lower temperatures lead to an increase in the moisture content of the vegetation.

A Gemsbok does this as part of its ability to survive without drinking.

These African wild animals furthermore produce  concentrated urine and allow its body temperature to rise rather than sweat as part of this strategy.

Are they social animals?

There are also bachelor herds made up of young males, and nursery herds that contain only females and their calves.

They wander widely when food is scarce and unreliable.

These safari animals lives in small herds of up to a dozen animals.

They do appear in larger numbers where the grazing is good.

These African wild animals mate at any time of the year.

A territorial oryx bull tests the reproductive condition of a female by sniffing her genitals, and smelling her urine.

If he finds a female in heat the bull will approach her with his head high or stretched forward.

He taps her hind legs with his foreleg.

If she is ready to mate she stands still and he mounts her up to six times in quick succession. 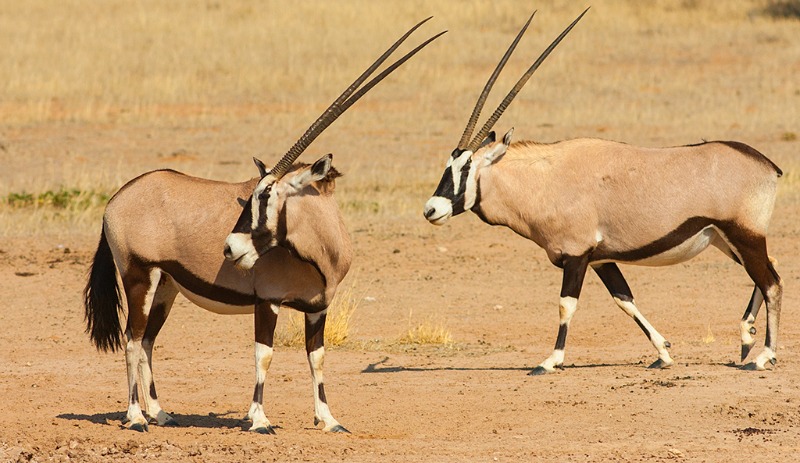 The stunning horns of Gemsboks, average 33 inches (84 cm) in length.

For its first three to six weeks the oryx calf usually hides itself in dense grass while its mother grazes a distance away.

A calf frequently spends the night with its mother and finds itself a new hiding place in the morning.

The mother may have to strike her calf with her horns to force it go and hide.

Once the hiding phase is over the calf follows its mother with the rest of the herd, and joins creches with its peers.

By the time the calves emerge their horns have started to grow.

This fact has started a myth that the calves are born with horns.

Calves are weaned when about six months old.

Are they territorial animals?

We know from Gemsbok behavior that territorial males mark their areas by thrashing bushes with their horns and pawing the ground.

They also mark territories with small neat dung piles from a low crouching position so that the pellets do not scatter.

These African animals have glands between the hooves that mark the ground wherever they walk.

Because their territories are so large bulls cannot protect all of it from intruders.

Most intruders leave as soon as they notice a resident bull so confrontations are rare.

How is dominance established amongst the bulls?

Clashes between males are quite common.

Serious opponents will circle each other slowly.

They while paw the ground.

Sometimes they will also thrash bushes fiercely with their horns. 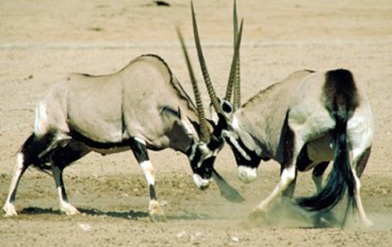 It will use its horns for jabs at his opponent only in the most serious encounters.

Because of the length and angle of his horns a bull will not fight by lowering his head and stabbing forward.

In deliberate fights the opponents use a well honed stabbing technique.

They stand alongside each other and hook backwards and sideways with the horns.

The skin on a bull's neck and shoulders is rather thick to serve as protection during these battles.

A dominant gemsbok bull is the one holding his head high with his neck bend.

The dominant animal will typically have his horns pointing towards his rival.

He is also likely to take slow and steady high steps as he moves.

The submissive animal is the one with a cringing posture that is keeping its head low and its tail swishing.

How do they defend themselves against predators?

This African animal has horns that are very effective against predators.

If more than one predator attacks it the animals will attempt to back into a thorn bush. 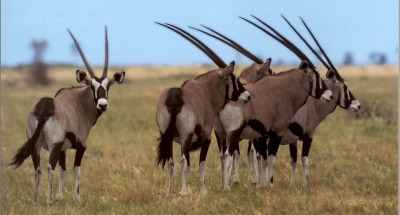 In this way it will protect its rear while at the same time slashing at the attackers.

Herds bunch around calves when spotted hyenas are detected.

They are however important prey for larger carnivores.

What is one last interesting fact about gemsbok?

They have an interesting way in surviving in the desert heat.

They don't seem to be bothered by the extreme heat of the day and don't even try to avoid it.

They do this through a mechanism called rete mirabile.

Blood flowing to the brain is cooled by heat exchange with blood flowing from the nasal membrane.

This process cools the body's heat balance allowing them to thrive in extreme conditions of the desert.