The Eland is sometimes called an antelope in an ox's clothing.

The "oxlike" characteristics develop in the adult males, including the thick neck dewlap which reminds one of a Brahma bull.

It stands 70 inches at the shoulder and weighs up to 2,000 pounds

The Eland is the world's largest antelope.

They have up to five vertical white stripes on the flanks.

As the bulls mature they become increasingly grey especially on the neck. 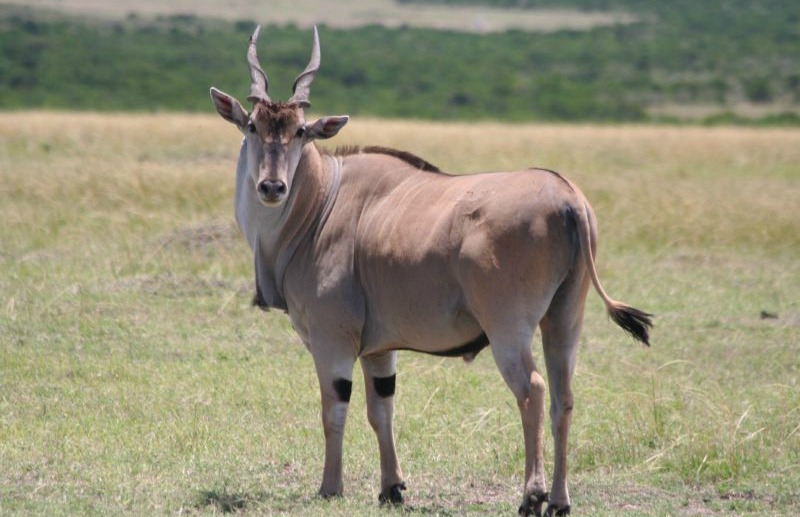 The males have a patch of stiff, dark brown hair on the forehead.

A dominant bull will bellow to advertise his superior status.

A cow clicks and grunts to attract her calf, which answers by bleating.

Eland can adapt to a wide range of conditions. They occur in arid scrub regions, savannas, woodland and grassland areas

They can function independent from water.

Diet - what do Eland eat?

They are mainly browsers but will feed on green grass.

They are not very selective feeders.

They will browse on leaves and twigs and also fruit and berries. 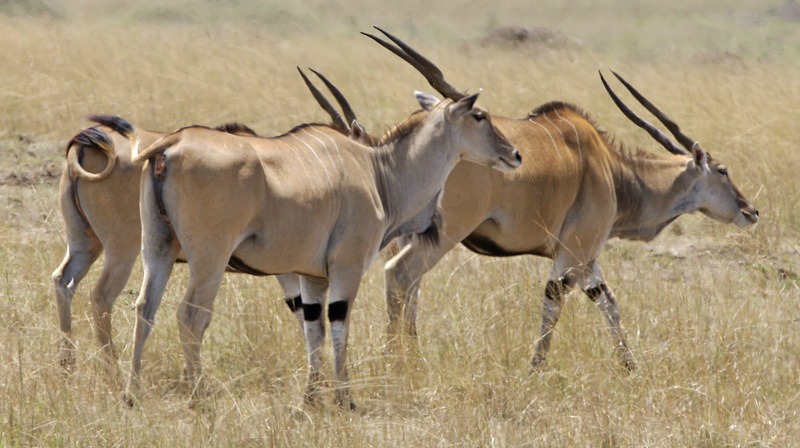 They feed long hours to sustain their considerable bulk.

If the foliage of a tree is out of reach you will notice how an it will break a branch between its horns.

Information about these wildlife animals indicate that their basic social units are small herds of which the composition changes seasonally.

They split into mixed-sex adult herds and herds of juveniles and sub adults.

During the winter cows and bulls herd separately. 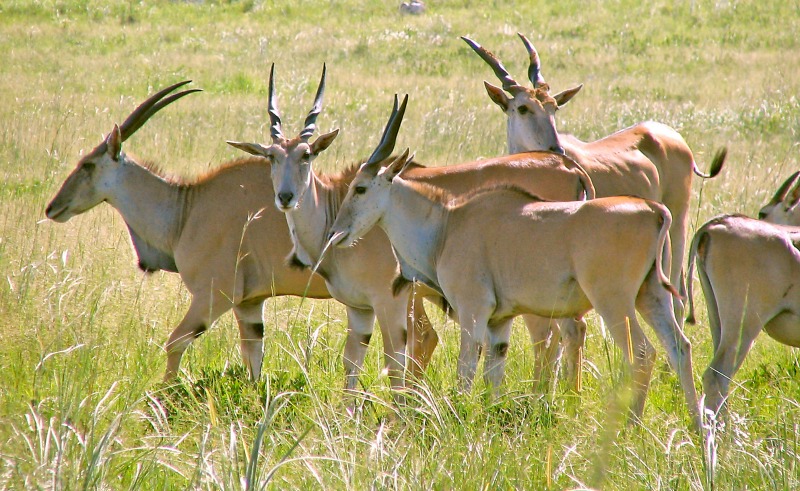 During the winter kudu cows and bulls herd separately

During spring the calving females join the younger animals to form a nursery herd.

In areas where food is available all year they are settled and don’t roam much.

These African animals are not territorial.

As they get older the male becomes increasingly solitary.

What do Eland antelope facts indicate about their breeding habits?

All the animals in a herd, females as well as males, regularly test each other's urine by smelling and tasting.

When the male detects a female on heat the dominant bull will stay close to the female and drives away any other suitors.

He courts the female by:

A calf can stand soon after birth and can follow its mother after three to four hours.

The calf of this African ungulate will stay hidden for the first two weeks.

The mother and calf will join the herd four to six weeks after the birth.

A calf will try to suckle from other females besides its mother.

A female will allow only her own to suckle and aggressively repel attempts from other calves.

A herd's females will work together to defend all juveniles when attacked by predators while the calves run to safety.

Calves develop strong bonds with each other by spending a lot of time grooming and licking each other.

How do Eland defend themselves against predators?

These African animals are slow runners and cannot run faster than 25 miles per hour.

They can however maintain a fast trot indefinitely.

In spite of their heavy physique they are however remarkably agile and they can easily clear a two-meter fence. 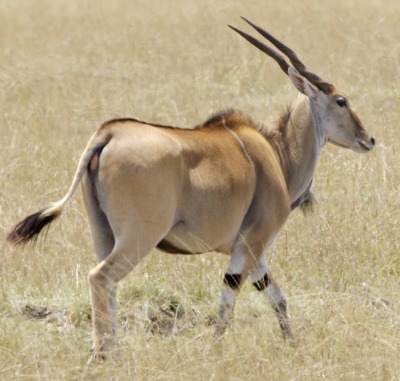 Because of its large size it always has a decent chance against attacking predators.

If a group is attacked they may bunch with their heads together to present a ring of kicking back legs to the predators.

The large males will take the front positions thereby protecting the calves and pregnant females.

Only leopards and spotted hyenas are able to prey on adults.

Do these African wild animals have a clear dominance hierarchy in the herd?

In an eland herd males and females have different dominance hierarchies.

If you see these wildlife animals shaking their heads (with the head held up high) you are witnessing a threat display.

If they are shaking their heads with their heads down while moving away - it is a sign of submission.

The dominant animal will often move the subordinate animals away from their favorite spots by issuing a few blows with the sides of the horns.

The most serious threat is a head-down charge with the ears held horizontal.

Eland bulls fight over females in heat by clashing and locking horns followed with pushing and twisting against each other.

The loser will turn and run horn wounds are sometimes fatal.

Friendly interactions among herd members are usually in the form of grooming one another.

This involves a process in which one animal will lick the head, neck and rump of the other.

What is one interesting last fact about them?

They make a distinct clicking sound as they walk.

The origin of the sound is not certain but it is thought that it may come from their knees.